Empoleon (Japanese: エンペルト Emperte) is a dual-type Water/Steel Pokémon. It evolves from Prinplup starting at level 36. It is the final form of Piplup.

Empoleon is a large, navy blue, penguin-like Pokémon. It has a wide, yellow beak with three pointed horns that form a trident-shaped crest and small, blue eyes. Large horns are a symbol of leadership and strength for Empoleon. There is a blue marking resembling a crown over its eyes and a white, lacy marking running down its chest. A blue, fin-like projection forms a collar around its throat and runs down the length of its chest and belly. On its back are two raised, gold bumps and a second blue fin that forms its tail. It was wide, flipper-like wings rimmed with blue along the tips and three golden claws. The edges of these wings can slice through ice floes, and this Pokémon will use them to attack anyone or anything that damages its pride. Its yellow feet are webbed with three toes each. 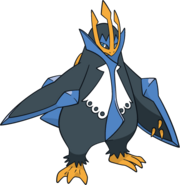 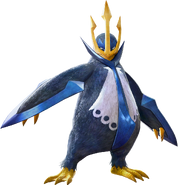 Add a photo to this gallery
Retrieved from "https://fantendo.fandom.com/wiki/Empoleon?oldid=2380821"
Community content is available under CC-BY-SA unless otherwise noted.