“...Thank you! Shadow! Sonic! I'm so glad to have met you... and everyone else too! I don't know what my creator was thinking when he made me, but I'm glad that he did because I got to meet all of you!”
— Emerl, Sonic Battle

Emerl is a character in the Sonic the Hedgehog series introduced in Sonic Battle. He is a powerful Gizoid built 4,000 years ago by the Fourth Great Civilization. He was later discovered by Gerald Robotnik who, in an attempt to quell his destructive tendencies, gave him the personality of his late granddaughter Maria. Later on, he was acquired by Dr. Eggman who planned to use him to take over the world, but was thrown away when he refused to comply with his demands. He was later found by Sonic the Hedgehog and his friends, who shaped him into an independent and free being. By the end of the game, he was destroyed by Sonic when he went haywire and tried to destroy the world.

Emerl was created 4,000 years ago by the Fourth Great Civilization. He was the first, and then only Gizoid created, "Gizoid" being ancient tongue for "everything". As a Gizoid, he had the power to download data from other beings and copy it himself, which he mainly used for fighting techniques and weaponry. Soon, he would know everything there was to know about combat. Eventually though, he became so powerful that he caused the destruction of the Fourth Great Civilization, and the Gizoid faded away for millennia since then.

In the present day, the Gizoid was discovered in an ancient ruins and placed in a warehouse, where he was discovered by Gerald Robotnik. He brought him aboard the Space Colony ARK, and unknowingly activated him while studying the Chaos Emeralds. The Gizoid and his connection to the Chaos Emeralds pushed Gerald to conduct extensive research on the subject. During this time, Emerl would mimic Gerald's movements. The scientist found out about his previous data on combat and weapons, leading him to speculate he may have played a part on the destruction of the Fourth Great Civilization, and realizing he would be a dangerous weapon if restored to his full power. In an attempt to curb the danger the Gizoid posed, Gerald made the Gizoid swear loyalty to him and to never leave his side by showing him his collection of model guns. He analyzed and copied their data, and thus established a "Link", a bond Gizoids form with someone possessing extreme power, and swore to only listen to Gerald.

During the creation of Project Shadow, the government threatened to shut down the Space Colony ARK, and Gerald offered the Gizoid as a bribe to buy him some more time to finish it. When he was handed over though, the Gizoid was fed with so much weapon data, including a Chaos Emerald, that he began to establish a Link with the government, overwriting his Link with Gerald. This caused him to go haywire and destroy part of the Space Colony ARK.

After this, the Gizoid, now defunct, was in Gerald's possession again. He attempted to give him a new AI to give it free will and emotions, and gave the Gizoid a code-based "soul" identical to Maria. For this to work though, he would need to be given special keywords that would allow him to awaken with his new AI, which would happen when it absorbed the seven Chaos Emeralds. The keywords were the last words Maria said before her death: "Bring hope to humanity." The Gizoid was then sealed by the government.

In Sonic Battle, the Gizoid was found by Dr. Eggman, who sought to use him for world domination. He used him to create the E-121 Phis for himself, as well as gave him a Chaos Emerald. However, the Gizoid refused to listen to Eggman, and wouldn't even give him the Chaos Emerald back. Eggman deemed him useless and threw him out, deciding to rely on his Phis instead. Later, Sonic found him washed up on Emerald Beach. In broken words, he asked Sonic to show him his power. The Hedgehog replied by showing him some moves, allowing him to form a Link with Sonic.

After this, Sonic took the Gizoid to Tails in his laboratory to see what he was. There, it was discovered that his power replication abilities were able to grow with each Chaos Emerald he collected. Afterwards, he was trained by Sonic, and was interested in his potential as a fighter. The Gizoid was then given the name "Emerl" as a reference to the Chaos Emerald he was being powered by. Sonic, Tails, and Emerl then went to Knuckles, though the echidna mistook Emerl for a Phi, and they battled. Emerl was able to best Knuckles, obtaining his Chaos Emerald and allowing him to speak his first full sentence.

Tails convinced Sonic that they should take Emerl to Central City for a full inspection. Thanks to Rouge, they were able to get a pass to the Central Lab, and it was there that Tails discovered that Emerl was an ancient weapon of mass destruction. Tails and Emerl escaped to Holy Summit after being chased by some Guard Robos, and Tails explained to Sonic about his findings.

Throughout the game, Emerl would continue going with Sonic and friends, obtaining more Chaos Emeralds along the way. He would also meet Sonic's other allies, including Amy and Cream, the latter of which taught him about sadness. Throughout the game Shadow would also appear, aiming to destroy Emerl. However, while looking for the answers to Emerl's past in Eggman's base, Rouge appears after reading Gerald Robotnik's notes, and tells him he gave both Emerl and Shadow a "soul" based on Maria so they could have feelings and decide not to cause destruction despite being made for war. Emerl was also told that his destructive personality would reset into an ordinary robot once he absorbed all seven Chaos Emeralds and heard Gerald's keywords. Mulling this over, Shadow gave Emerl his Chaos Emerald, which was the last, and restored him to his former self by saying "Bring hope to humanity." Now restored, Emerl thanked Sonic, Shadow, and everyone else for keeping him safe.

In the final part of the game, Eggman announces that his Final Egg Blaster on the new Death Egg is complete, and he will use it to take over the world. Emerl goes with Sonic on the Death Egg to stop him, with Emerl specifically tasked with hunting down Eggman. He managed to defeat the mad doctor who begged for mercy, with Emerl letting him be. However, this was a distraction, as Eggman used the Final Egg Blaster to destroy a cluster of stars, causing Emerl's original programming to kick in and establish a new Link after witnessing this power. However, this proved to be too much for Emerl's systems, and he went haywire and reverted to his original purpose as a superweapon. He took control of the Final Egg Blaster and attempted to use it to destroy earth, but not before Sonic and Eggman tried to intervene. Sonic arrived with the Master Emerald to try and override the energy within Emerl, but the Gizoid smashed the emerald to pieces, prompting Sonic to fight Emerl himself. He was successful, but Emerl suffered too much damage, and was left on the verge of self-destruction. He thanked Sonic and his friends one last time before self-destructing in a flash, leaving nothing but the Chaos Emeralds behind. Later on, Sonic assured everyone, especially a weeping Cream, that Emerl's spirit was still with them. 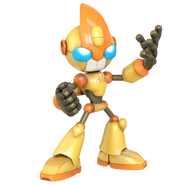 Render by Nibroc-Rock
Community content is available under CC-BY-SA unless otherwise noted.