Ellie the Elephant is an Animal Friend that appears in the Donkey Kong series. She is a large, gray elephant and a strong ally to the Kongs.

Her only appearance is in Donkey Kong Country 3: Dixie Kong's Double Trouble!, where she can be found and ridden on by destroying her Animal Crate. Ellie has two unique abilities, both involving her trunk. She is able to suck in nearby objects such as Barrels with her trunk and hold them up, and can throw them at enemies or obstacles. She can also use her trunk to collect water from bodies of water such as a river or a waterfall, and fire it at enemies as a projectile. However, she becomes scared when mice-like creatures, such as Sneeks, appear, causing her to drop whatever she is carrying and run away, based on the popular but untrue myth that real-life elephants are negatively cautious of mice. 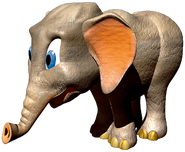 Ellie as she appears in Donkey Kong Country 3: Dixie Kong's Double Trouble!
Add a photo to this gallery
Retrieved from "https://fantendo.fandom.com/wiki/Ellie_the_Elephant?oldid=3324823"
Community content is available under CC-BY-SA unless otherwise noted.