Ellen D. Koopa is one of the Koopalings. She is in between Iggy and Dolly in age, and is usually referred to as Elly.

She has a greenish-brownish head with a purple star on it, with one tuft of purple hair. She is relatively fat compared to most of her siblings (other then Morton, Roy isn't fat, he's muscular).

Elly is the calmest Koopaling, and usually the peacemaker. However, if anyone calls her a "goody two-shoes", they get beat to a bloody pulp. (This is usually Roy)

Ellen respects her only older sister, and usually goes to her for comfort. They don't interact much, other than that.

Ellen thinks that Pyotr is odd-looking, but is still his friend. Sometimes Pyotr takes Ellen's stuff, but gives it back as soon as Ellen asks for it.

Ellen finds Ludwig a little weird, but still respects him since he's older than her. She sometimes assists him when he's inventing- though she doesn't enjoy it, since it usually blows up in their faces.

Ellen enjoys Lemmy's circus acts, but doesn't like hanging around him when he's not performing. Lemmy admires her and likes following her around, but Ellen finds him annoying.

Ellen and Roy are arch-enemies. They get into fights a lot, and usually Ellen wins. However, they still co-operate when defeating the Marios.

Ellen thinks Iggy is crazy, but helps him with his inventions, like she does with Ludwig. However, she enjoys helping Iggy more, because Iggy's inventions work better.

Ellen and Dolly are close friends that talk together a lot. They work together in Flower Power, Mario 3D World 2: The Dream World, and are default partners in Super Mario Party 10. Dolly says that she knows Ellen's middle name, but refuses to tell anyone- most people don't believe her. Ellen sometimes helps Dolly with her cooking, but usually messes it up, so typically leave Dolly alone with it.

Ellen likes Alex, but is slightly afraid of getting electrocuted, so doesn't usually hang around him. She respects him a lot, and thinks that he is the most likely out of all of her siblings to finally defeat the Marios.

Ellen finds Wendy spoiled and dislikes her a lot because of this. She doesn't like being around Wendy, and Wendy usually avoids her too.

Ellen finds Lady weird, but likes her fashion style. Sometimes Ellen borrows Lady's sunglasses to go with Harley's coat. Occasionally Ellen, Lady, Dolly, and Dragonia put on a fashion show together, with Wendy being a judge. Overall, they get along well.

Ellen finds Jackson intriguing, but strange. She doesn't like how cocky he is, but still likes watching him fight the Marios.

Ellen really dislikes Larry, because he spies on her a lot. She also doesn't like him cheating in the video games they play together occasionally.

Ellen finds Harley funny, and sometimes steals his coat. Other than that, they don't interact much.

Mario 3D World is Ellen's first appearance. She appears as the boss of Milkshake Lake, and uses Cheepskipper and Gooper Blooper as minions. In her battle, she rides a winged block and spits fire at you. This battle tactic is shared with her sister, Dragonia.

Mario 3D World 2: The Dream World is Ellen's second appearance. She is paired with her sister Dolly in this game, and they are fought in the second quest version of Subcon Icelands, replacing Fryguy. In this battle, she is fought the same way as in Mario 3D World. Dolly works with her, fighting the same way. They are on opposite sides of the screen during this battle. She and Dolly are the last Koopaling bosses until the final boss, where she works with all of her other siblings.

Koopalings is Ellen's third appearance. Her stats are as follows:

Her description is as follows:

"Ellen D. Koopa, the calmest Koopaling. She has good stamina and attack skills, but has average magic and very bad defense."

Super Mario Party 10 is an upcoming appearance of Ellen. It has not been released yet, but it has been confirmed that she will be an unlockable character, with a default partner of Dolly. To unlock her, you must beat her board- Cosmic Station- in Story Mode, then buy her in Shop Mode for 1,000 Party Points.

Super Smash Bros. Ω is another upcoming appearance of Ellen. She is a DLC character, alongside Gina. She costs 500 Wii U Points. Her moveset is as follows.

Fireball is Ellen's standard attack. She spits a fireball, and it works like Mario's.

Wand Blast is Ellen's side attack. She blasts magic sideways, in the direction she's facing. Her magic works like Luigi's fireball, but it turns the opponent it hits purple, and they continue to be damaged every two seconds (1% at a time) for about 20 seconds.

Winged Blocks is Ellen's up attack. She creates blocks underneath her which only she can stand on. From up there, she can fly up, down, left, or right, and use any of her attacks. To get off of the blocks, she must hit Up + 1 again. This attack is based off of her tactics in M3DW and M3DW2.

Shell Slide is Ellen's down move. She curls into her shell and starts working like Shell Mario.

Elling Storm is Ellen's final smash. She calls on her Ellings, which stampede the bottom of the stage. How they work are as follows:

Mario 3D World U is an upcoming appearance of Ellen. She's the boss of Sarasaland, and uses Mummipokey as her minion.

Her name is Ellen D. Koopa (which is a reference to Ellen DeGenerous), but most people call her Elly. No one really knows what her middle name is, except her mother, who named her. 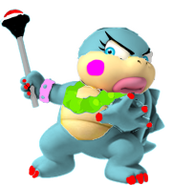 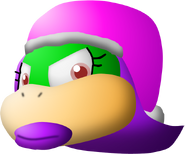 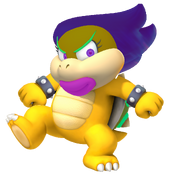 Ellen in Koopalings: The Series.

Ellen as she appears in Princess Daisy and the Legend of the Sarasaland Scepters. 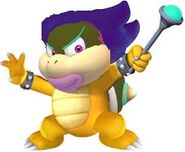 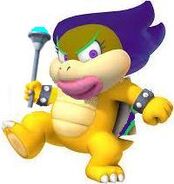