Elkine Idana, also known as the White Moon, is a less-than-popular intergalactic mercenary. A crossbreed between a Siandrall and an Amphibios, Elkine is known (by the people who DO know her) for her secluded nature, ornate coral-like antlers, and her weapon, the Reefbreaker, a shield that can convert into a mouthguard-like device. Elkine is dedicated to whoever gives her a task and will stop at nothing to prove herself as a viable mercenary. Her first appearance in any piece of media is the first Black Sun film, acting as the second main protagonist.

Elkine was born to a Siandrall and an Amphibios in the year 1985. Both of her parents immediately took notice of her strange appearance, as she lacked the Siandrall tails and had webbed fingers and toes, along with yellow eyes and green skin. This was due to the DNA of the two parents fusing in an alien way, resulting in a baby with both of their traits. Shortly after, the father left for unspecified reasons, leaving Elkine and her mother alone.

As she grew up, Elkine's Siandrall horns followed suit. However, rather than being pointy like other Siandrall horns, Elkine's horns were not only more rounded, but also wider than usual. This was especially unusual, as her father lacked any kind of horns on his head. Overtime, Elkine started being teased for her weird horns by peers, always being laughed at for how large they were.

When Elkine was 17, she came home from school one day only to find that her home was wrecked, with broken artifacts, scratched up walls, and footprints all around the floors. In addition, her mom was nowhere to be found, instead being replaced by Cousin, a member of the infamous Tony crime family, who had the weapon used to raid the house on him. Cousin proceeded to threaten Elkine with murder and kidnapping and was about to physically harm her...until a stray bullet found it's way into Cousin's head, killing him in one shot. Elkine looked out of the window and saw an outline of a man and a smoking gun, recognizing him from the news: the infamous Black Sun.

Ever since he had accidentally saved her life, Elkine had been physically and mentally training herself to become a mercenary like Black Sun as a kind of weird "thank you" to him. It wasn't until she was training in a gym one day until she met Lupita Nebulava, an up and coming officer for the United Galactic Confederacy. Elkine started to fall in love with Lupita, becoming close friends until she told her about her true feelings. As it turns out, Lupita felt the same for Elkine and the two hit it off after that, with future events forcing Lupita to leave the UGC and becoming a solo hero. She even teamed up with Elkine to arrest criminals she couldn't arrest on her own.

Elkine met Black Sun again when she went to Mistress Murder's one night and encountered him in person. Zephon didn't recognize her (after all, he had killed plenty of people in the past), but with more context from Elkine, he remembered the night well. The two, while not as close as her and Lupita, are still close allies, with Zephon acting as a kind of father figure towards her (since she lacked one and all).

Elkine, being part Siandrall, is naturally quite tall, albeit somewhat small for Siandrall height. Complete with tall legs and lanky arms, her skin complexion is the signature Amphibios green. Her hair is a silky silver color, with her eyes being the yellow hue all purebred Amphibios are known for. While not shown, her feet and fingers have expandable webbing, allowing for fast and stunning underwater movement. She lacks the prominent tails that Siandrall's have, however.

Elkine's most noticeable feature are her large, hefty, and ornate horns. Resembling undersea coral, her horns are above average in terms of shape and size. This is especially odd when you consider no normal Amphibios has any kind of horns at all. Whatever the case may be, these horns are very deer-like in stature and coral-like in design, emanating the Siandrall's signature pink colors. These horns are one of the reasons that Elkine isn't taken that seriously in the mercenary world, as her horns make her somewhat of an obvious target.

In terms of clothing, Elkine wears an outfit comprised of silvers, blacks, and a bit of gold dashed in here and there. She wears silver pointed boots and a set of sharp shoulder pads of the same color. He regular outfit is made from dark gray pants, a belt, and a military general-like coat of sorts. Her most noticeable article of clothing, the Reefbreaker, is a shield that can convert itself into a special mouthguard/mask that follows her outfit's color scheme.

Elkine, to the few who know her, see her as caring and loyal. She's someone who, once a bond is formed, will try as hard as she can to not break that bond and will only do so if the person she cares for betrays her. When Black Sun is out of commission, Elkine is the first one to pick up the slack, acting as a secondary leader and even full-on leader at other points. A strong leader, Elkine is familiar with taking charge when the action is needed.

While Black Sun is a mercenary for the fun of it and also money, Elkine is a mercenary out of a need for survival. She often debates if being paid to kill people is the right choice, and while she does go through with it depending on the person she's been hired to kill, there are times where she can't bring herself to kill people she deems innocent. She debates these moments as the reason she isn't looked highly looked upon in the greater mercenary community. What she once thought of as a fun profession turned out to be a morally-demanding job.

Elkine's self-worth is something she doesn't look highly upon. Often secretly berating herself for even the smallest mistakes, Elkine seeks to constantly improve everything about her character in order for people to take her seriously. Her romantic relationship with Captain Nebulava has helped her get better, knowing someone she can truly confide in and trust. She values Nebulava and Zephon a lot, with her viewing Zephon as an ally and a sort of father figure to her.

As a crossbreed, Elkine has the abilities of a Siandrall and an Amphibios, making her somewhat versatile. On the Siandrall side, she has the ability to read the Runes of the Primordial. Her tall height makes her extremely fast and agile, being able to run at fast speeds and jump higher than most of her peers. Her horns, unlike most Siandrall's, can be used as large blunt weapons akin to deer antlers due to their large shape and structure. However, she doesn't use this method of attack much due to fear of breaking them.

Her traits inherited from her father give her multiple water-based attacks. Elkine has traded her tails for webbed toes and fingers, allowing for her to swim excellently and at fast speeds to boot. She is able to breath underwater for a total of 10 minutes without air and technology and see underwater without the use of technology for a few minutes as well. However, Elkine is not invincible. She is easy to tire, usually pushing herself to points of exhaustion and constantly seeing how far she can go with her physical limits. As such, she is usually required to travel in a vehicle rather than on foot when it comes to large-scale missions.

Elkine's mouthguard can be removed and convert itself into a shield known as a Reefbreaker. The mouthguard form is used to protect her face, being able to deflect bullets and take larges amounts of damage. It's shield form heightens these abilities while adding more, such as a larger defense area and rebound technology. The shield can be thrown and is able to be used as a platform for others to run on and jump on. In addition, it can be good for sliding down steep terrain, allowing for a kind of shield surfing. The shield is not without it's flaws, however, as too much weight put on it can hinder or even disable certain powers it has.

Elkine's first official appearance was in the first solo Black Sun movie. Acting as somewhat of a foil for Zephon, she slowly developed into a friend and someone he could trust. Tagging along with him to the planet Ymirn, Elkine secretly contacted her fiancée, Captain Nebulava, to make sure that if anything went wrong, she would have their backs.

Fanart of Elkine, Nebulava, and Black Sun in a group shot drawn by Tumblr user of-coffee-and-sunshine. 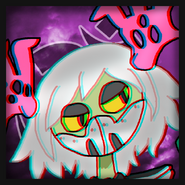