View source
“I have more of a fear of failure than a fear of further loss. As someone who constantly studied magic, I never gave up in studying specific spells. I was desperate not to fail.”
— Elina, Champions of Ascerth: The Chronicles, Chapter 7: The Zar'kesh

Elina is one of the protagonists of the game Champions of Ascerth, and a major protagonist within the Ghostverse. Raised with magical powers, she seeks to stop the krexxon invasion she saw in her visions. While initially created as a simple party member for her debut game, she began to play a larger role over time and now stands as a major protagonist.

Elina has a short honey-blond haircut, and wears blue-tinted glasses. A staff is almost always found on her back as well. Elina tends to lack physicality, as she's quite slim.

While in the past Elina wore a combination of traditional mage robes and armor, she now wears an outfit consisting of a basic robe-like cloth around her neck, on top of a sweater. She tends to dislike "formal" clothing, preferring more casual wear.

Elina is relatively impulsive; when something needs to be done, she is the one who offers to do it. Her pragmatic ideals have her believing that if something needs to be done, it must be done. As the adopted daughter of a powerful mage, she had few friends, and is a bit socially awkward, often acting cold towards people she distrusts or doesn't have an opinion towards. However, when she admires or trusts someone, she can act quite affectionate and friendly, even coming off as clingy in some cases.

Having studied countless magical manuscripts, Elina is quite educated, knowing much about the world. She can come off as condescending without her realizing it. She also grew up not knowing who her original parents were, so discussions about family can be heartbreaking for her.

One problem Elina does face however is holding back with her power. Despite being known as the Divinios, the most powerful magic user in the galaxy, she usually doesn't use all of her power at once, often restraining it out of fear of hurting her allies.

In combat, Elina relies on her magical knowledge to attack her enemies, using spells from all five elements. She took many years to learn how to use all five elements without having them pour together and form shadow magic.

Out of combat, Elina is quite skilled in regards to research and teaching others, able to help out those she's with easily. Some of her specific abilities can be seen below.

Elina only knew that her parents dropped her off at Xastil City's orphanage before leaving the city. Thus, she was raised by the orphanage, until a mage named Norris Keats came to the orphanage. Sensing great magical potential in Elina, he adopted and raised her from the young age of two years old.

Growing up, Elina expressed an interest in magic, and was taught by her adoptive father starting when she was eight years old. She learned to master the various schools of magic quite efficiently, and managed to utilize various spells quite efficiently. Magic came quickly to her, and she would eventually be taught everything her adoptive father knew. Desperate for more knowledge, she visited Xastil City's libraries frequently to study other books containing magical knowledge.

One day, Elina began seeing visions of large ships floating in the sky, raining down hell on Ascerth. Troubled by these visions, she would begin to watch the ships carefully, noticing occasional attacks on small settlements. Eventually, when she noticed a refugee coming into Xastil City, she was intrigued, sensing distress from him. Despite being socially awkward, she approached him, mentioning that she too sought to stop the invaders. The man identified himself as Kaiden, and the two of them set out to stop the krexxon invasion, with the two of them falling in love in the process.

Elina and Kaiden would later move into an apartment within Xastil City together. She'd begin to take up teaching magic to willing students, and would enjoy it.

However, she later began to experience visions of various events she could barely comprehend. When she went to meet with her father alongside Kaiden, she'd fall into a coma due to another round of visions.

Yet, it was no ordinary coma. Elina found herself in a dimension known as netherspace, and would train to utilize more advanced magical abilities, learning from two magical spirits who were actually her biological parents, albeit no longer mortal.

Elina would wake up from her coma a few months later, and come face to face with Kaiden again. Yet, the reunion was short-lived as an explosion occured in Xastil City. She'd fight alongside Kaiden and the rest of the group to save Ascerth, and would later join up with the Vanguard of Spirits alongside Taikari.

Elina was present on Jalgor for the final battle against the Soul Grazer. After Jogot's funeral, she was proposed to by Kaiden.

Elina would try desperately to find Kaiden, and would eventually come to the continent of Buzokai to locate him. However, on the journey there, she'd begin experiencing sickness.

Elina appears in both versions of Fantendoverse X as a summonable unit.

Elina appears as one of several playable characters in Roulette Rush.

Elina appears in Super Smash Bros. GR as a playable character, based on her Ghostrealm Heroes moveset with some tweaks.

Elina appears as an assist in Zonal Fever, using attacks that involve characters from her debut game.

Elina was initially weary of trusting Kaiden despite seeing him in her visions. But as the journey went on, she began to admire him as a person, to the point where she was willing to put her life at risk for his sake. This would eventually develop into a thriving relationship. Elina mostly admires Kaiden for his willpower and ability to take on any threat that stands in his way, along with his "soft side". 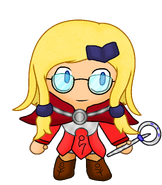