Elena is one of the characters of Galactian: Battle of Bracelets and she is playable. She first appears when Aingeru wins his first Icon in Forestia City. She is the Teal Bracelet, considered the Green Female Bracelet. She has a lot of common things with Aingeru. Her nemesis is the Myntle Dark Bracelet, who is called Lance. Her special weapon is the Igniter Blade. With this weapon she can make cuts easily, but not only that. One of the most important features of this weapon is that it can heat anything like it was a lighter. Her special ability is Thunder Form. This is one of the most powerful abilities that lets her turn into a thunder. Her speed is increased thanks to the electricity but she gets weak against some elements like Sand or Crystal.

Elena is the fifth Golden Bracelet who appears in Galactian: Battle of Bracelets. She is a playable character in VS. Mode and Challenge Mode and unlocked when you arrives to Candelion Volcano in Story Mode. She first appears when Aingeru wins his first icon. Garone and she are fighting and she need his help. Elena looks weak but she is really a good fighter. She also wants to get the 30 Icons and compete in the "Sunday Fighting Tournament". She has to fight against some Dark Bracelets like Alange, Garone or Inferna. She usually wants to fight against some bracelets like Aingeru, Xavier or Rachel.

Elena is the only person who looks for Aingeru and Rachel. She wants to train against them while she fights. She usually goes to the next cities and she hasn't visited any special place so she hasn't had problems with some Dark Bracelets. One of her last fights is against Shion the Dark Pink Bracelet, when she tried to rescue Xavier who lost a combat against Aries Commander.

Elena also appears in Ella-Metals vs. Battle of Bracelets as one of the six default players of this game. She also appears in the Story Mode. In the story, she tries to make everyone gets calmed and stop attacking each others. According to her, she already knew about Ella and her friends and some plans from some Dark Bracelets.

Elena is a very passionated girl, and she always tries to do her best. When she is happy, she is plethoric and she is sometimes in the doldrums. She is very optimist but her clearest feature is that she is very romantic, sometimes in excess and she bores anyone. Ainhoa and Drake can't stay with her because she is sometimes a bit tiring. She is very rear and anybody can't tell her any secret. She is very blab; she invents some things that disturbs Aingeru or Pablo. She is very active and she can't stop moving because she hasn't much time. She needs to run to the other city. Since she is saved by Aingeru in Aurora Ruins, she has started to feel something for him. When Shadow Aingeru almost kill her, and he finally stops it, she tells him about her love and Aingeru smiles. Aingeru accepts dating. Now Elena is his girlfriend.

She is one of the persons who loves the cities. She needs to be in a city like the air and she always has to go shopping. She wants to write in her daily every day and anybody can't read it. She loves raining because she lives in a city where is usually sunny and she wants to refresh with the rain. She hates cold and snow so she tries to visit warm places. She has a friendship with Rachel and Bruno since they are two of the first Golden Bracelets that she meets.

Elena in Battle of Bracelets 5

Elena in Battle of Bracelets: The Origin of the Legend 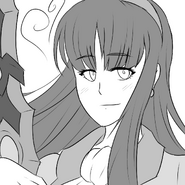 Temptress Elena
Add a photo to this gallery
Retrieved from "https://fantendo.fandom.com/wiki/Elena?oldid=3147538"
Community content is available under CC-BY-SA unless otherwise noted.