Electrode (Japanese: マルマイン Marumine) is an Electric-type Pokémon. It evolves from Voltorb starting at level 30.

Electrode also appears in the Smash Bros. games as a possible Poké-Ball Pokémon. Present in all installments thus far, it uses Explosion after about five seconds. This does massive damage and knockback even to the summoner, and kills at low percentages. At the last second, you can pick it up and throw it at opponents. Starting in Brawl, Electrode may sometimes be a dud that does nothing...or it may be a "fake dud" that explodes after another three seconds.

Electrode is literally a living Poké-Ball with a face. What differs it from Voltorb is that it's upside-down: its top half is white, while its lower half is red. For this reason, many Trainers try to pick it up, mistaking it for an item. The Pocket Monsters Carddass Trading Cards depict Electrode as hollow. Many know it by the nickname "Bomb Ball." Some fans have also compared it to fishing tackle.

Electrode tends to live in power plants where fresh electricity is being generated, which it consumes. As a result, it often causes blackouts. The more electric energy Electrode consumes, the faster it moves. Electrode explodes in response to even the smallest stimulation, simply to entertain itself, or because it has taken in too much electricity. When full of stored electricity, it has been known to drift with the wind.

Electrode is a genderless Pokémon.

Again, it's a living Poké Ball. Also, based off its Japanese name and its explosive tendencies, Electrode may have some connection to land mines. The design concept may be a relic of the time when the franchise was known as "Capsule Monsters", as early Sugimori artwork shows Poké Balls without the button in the middle. Like Voltorb, it may be based on ball lightning as well.

The English name is the literal word "electrode", a type of device through which electrical currents pass, but it is usually in the shape of a rod.

The Japanese name is a combination of 丸 maru (circle) and "mine"; as noted above, Electrode makes some references to land mines. 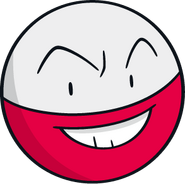 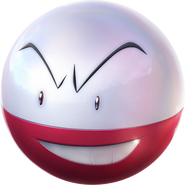