Electric Wario is one of Wario's Reactions in the Wario Land series. It was introduced in Wario Land 3.

When hit by an electric attack, Wario falls down when knocked back, landing on the ground in a state of shock. He will then bounce a bit, and hold stock-still to remove the shock from his body. Any enemies touching him will be immediately defeated. It's debatable to really call this a power-up given it's short duration as well as it's complete non-use in anything except defeating enemies. 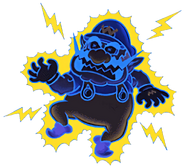 Electric Wario
Add a photo to this gallery
Retrieved from "https://fantendo.fandom.com/wiki/Electric_Wario?oldid=2757261"
Community content is available under CC-BY-SA unless otherwise noted.