Fantendo - Game Ideas & More
Register
Don't have an account?
Sign In
Advertisement
in: Articles under Construction, Free to use Characters, Characters,
and 15 more

Eight is a new character who was introduced in the fourth installment of the Dark Woods series where she is the main antagonist. She is an alien under the leadership of The Threat and was sent to the Dark Woods to win the dimension for her leader.

Eight is a slender and humanoid appearing alien with a notable gray skin. She wears an eye-patch over right eye of which the contents behind it are yet unknown, and her other eye is purple. She has a piece of human looking skin which covers the down left part of her face without a proper nose. The left side of her mouth exposes her giant jaw. She has long purple and messy hair which reaches her back, but it might not be her own hair.

Her body is covered with spikes around her arms and legs area. One of her hands is has sharp claws while her other arm often hangs like a soft squishy whip. Duo to her shapeshifting and hardening abilities she often changes this whip in a scythe-like form. She wears a black collar and a matching black dress which has a belt in the symbol of The Threat. She has a purple/orange striped bracelet, and wears black stockings with purple shoes.

Eight is one of the Threat's several highest ranking members, being number eight of ten. She was given the special mission to infiltrate and take over the Dark Woods for The Threat in a competition between her and The Enemy. Upon arrival in the Dark Woods she mysteriously gained her new appearance to look less alien, the true story behind this remains yet unknown.

Like many of the other servants Eight is a powerful warrior. She exceeds far in her speed being able to outrun almost everyone. She uses her speed to her advantage in battle either to successfully land a strike or flee when things might get dangerous. Her true unique ability lies in shapeshifting and hardening. She can shapeshift parts of her body in size and slightly in form. The shapeshifted body parts being her right arm, her left jaw and the spikes covering her body. She often shapeshifts her right arm into a scythe but is known to also make it a lance or claymore, but also uses it as a whip. She applies her hardening ability to make the weapons, and spikes much harder and sharper but also to increase her own defense.

Eight has been confirmed to play a main antagonistic role in the upcoming fourth installment of the Dark Woods series. 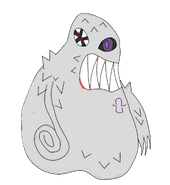