The Eggplant Wizard is a villain from the Kid Icarus series. It is, as suggested by its name, an anthropomorphic Eggplant with magical powers that is affiliated with the Underworld Army. It has a variety of magical attacks, but its most notable involves him being able to turn Pit into an Eggplant, making him unable to attack until he visits a hospital.

The Eggplant Wizard was designed by Toru Osawa. Osawa designed the enemy in-part as a tribute to the Eggplant Men of Wrecking Crew, but also to reference his own love of eggplant.

In the original Kid Icarus game, Eggplant Wizards are lieutenants of Medusa and can be found guarding fortresses. Often appearing in pairs and tossing their eggplant magic in an arc very similar to Hammer Bros., they grow more numerous with each subsequent fortress that is defeated.

They have high HP making them difficult to defeat, but are only able to walk back and forth, and cannot pursue.

Eggplant Wizard appears as a singular, recurring character in the 1980s Saturday morning cartoon series. One of Mother Brain's two primary lackeys alongside King Hippo, he appears in nearly every episode. Not only is he seen to have a huge rivalry with King Hippo, but he is shown to be both clever and devious, hatching his own schemes and even turning on Mother Brain.

When hurt or agitated, he would spout fruit and vegetables. He is known to use these items for various humorous purposes, such as utilizing a banana for a phone.

In the sequel to the original game, Eggplant Wizards are weaker than before but still appear only within fortresses. Here, their curse now brings new pros and cons with it: A cursed victim will be unable to fight fortress bosses as they will not appear in their chambers, however the curse will also shrink the individual, allowing them to fit through spaces they otherwise could not enter.

The Eggplant Wizard appears as a sticker.

In the third installment of the series, Eggplant Wizards are now at their weakest, relegated to minor enemy status while the dreaded Tempura Wizard has taken his place as Underworld lieutenants. This is presumably due to the curse now being only temporary, as Palutena herself will eventually remove it from Pit though the curse now also causes significant damage. Despite this demotion, the Eggplant Wizards now are capable of teleporting around the room, making them more difficult to hit.

The curse can also be cured now with Effect Recovery. Eggplant Bombs also appear as a Miracle Attack and throughout the game's Multiplayer mode that will turn enemies/other players into eggplants.

Eggplant Wizards are uncommon to rare enemies that appear in this Lunatic Entertainment title. They appear in underworld fortresses primarily, but can also be found in plant-laden biomes, such as Overgrown Gardens. They also possess their own unique biome known as the Eggplant Kingdom. Here they are fairly common, and protect the fortress in large numbers. The boss of this fortress is always the Eggplant King, a character based on the Eggplant Wizard character seen in Captain N: The Video Game Master.

The Eggplant Wizard appears as one of the thousand + characters seen in Ultimate Showdown. Here, his default appearance is that of the version seen in Captain N; however, he possesses alternate costumes for each of his other game appearances. He possesses attacks based on his techniques in the cartoon series as well as all abilities showcased throughout the actual Kid Icarus games. 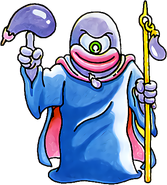 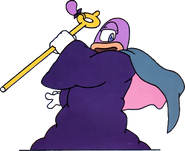 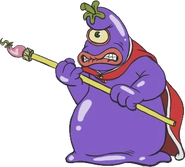 Add a photo to this gallery
Retrieved from "https://fantendo.fandom.com/wiki/Eggplant_Wizard?oldid=2909004"
Community content is available under CC-BY-SA unless otherwise noted.