The Eggplant Man, originally parsed as Egg Plant Man and known in Japan as Eggplant Mask (Japanese: ナスビ仮面 Nasubi Kamen), is a metallic mask-wearing eggplant that first appeared in the NES title Wrecking Crew. An Eggplant Man first appears in the second stage, and acts as an obstacle for Mario and Luigi. They later appeared in Wrecking Crew '98, as a trophy in Super Smash Bros. Melee and as a cameo in WarioWare: Twisted!.

A member of the Eggplant Man species also appears in the Chibi-Robo! series under the name of "Kid Eggplant". The Eggplant Wizards of the Kid Icarus series were designed in-part as a tribute to the Wrecking Crew enemy, and Pit's design when under their spell makes him vaguely resemble one. 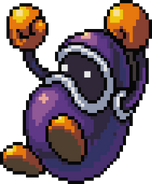 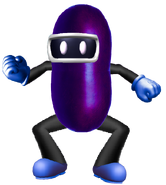 Art by Computerboy64 (t∣b∣c)
Add a photo to this gallery
Retrieved from "https://fantendo.fandom.com/wiki/Eggplant_Man?oldid=3194509"
Community content is available under CC-BY-SA unless otherwise noted.