“Now, the world shall be my plaything! I shall bring about an age of fear and chaos! And it shall be glorious!”
— Eggman Nega, Sonic Rush Adventure

Eggman Nega, or simply Nega, is a recurring antagonist in the Sonic the Hedgehog series. An inhabitant from 200 years into the future, Eggman Nega came from a long lineage of brilliant scientists, though that lineage was disrupted by the countless failures of Dr. Eggman. As a result, the world refused to accept Eggman Nega's brilliance, denying him what he thought to be his destiny. This caused him to hold a strong resentment against his ancestor. At some point he became involved with Blaze the Cat's world, becoming her rival similar to Eggman being the rival of Sonic the Hedgehog.

Eggman Nega made his debut in Sonic Rush. He plots to create an interdimensional Eggman Land that he can rule over, though to do so he needs both the Chaos Emeralds and their equivalent in Blaze's world, the Sol Emeralds. To achieve this, Eggman Nega forms an alliance with his ancestor, Dr. Eggman, though in secret plans to make him do all the dirty work. He sends Eggman to Blaze's world to steal the Sol Emeralds, unknowingly causing the two dimensions to begin merging until they both cease to be.

During the game, Sonic first sees Eggman Nega in Water Palace, and mistakes him for the Eggman he battles. He laughs and corrects him, then proceeds to battle him in his Egg Turtle. In the end, he is defeated, and escapes. This continues for some time until Eggman Nega reaches Dead Line to meet with Eggman, and he is confronted by Sonic again, this time with Blaze. He is surprised to see the cat in Sonic's world, and deducts that Eggman must have made a mistake. He reveals his grand scheme and expresses apathy toward's Blaze's world, which makes her angry and leads her to swear to kill both Eggmen. She and Sonic get into a fight at what should and shouldn't be done, and Eggman Nega laughs, thinking the scene to be hilarious. Soon, he escapes, but is confronted by Sonic again in Unknown, and defeated in his Egg King.

Regrouping after their defeats, both Eggmen used their Egg Salamander to attack Blaze while she was alone and drained the Sol Emeralds of their power. Eggman Nega expresses confusion, saying that he is surprised Sonic's world is remaining stable, as the Chaos Emeralds and Sol Emeralds occupying the same space would cause destructive results. However, Sonic shows up with the Chaos Emeralds, saying he knows how to keep them stable. Both Eggmen then teamed up against Super Sonic and Burning Blaze, though they were eventually defeated. Eggman Nega is baffled how his plan failed after a minor miscalculation, and hoped to be able to salvage what was left, but Sonic and Blaze destroyed the Egg Salamander immediately after. This caused both worlds to stop merging.

In Sonic Rush Adventure, Eggman Nega once again teams up with Dr. Eggman to make an interdimensional Eggman Land, this time using the power of the so-called "Power of the Stars", which is said to be stronger than the Chaos Emeralds and Sol Emeralds combined. The key to unlocking this power was the Jeweled Scepter, located somewhere in Blaze's world, so both doctors built Captain Whisker and his robot crew to find it. In the meantime, the Eggmen had to find the place to use the Jeweled Scepter to unlock the Power of the Stars, which Eggman Nega determined to be underneath Southern Island after a great deal of research.

Though Whisker and his crew were defeated by Sonic, Tails, Blaze, and Marine, the former two Eggman Nega had not expected would interfere with the plan, Eggman Nega and Eggman managed to find the Jeweled Scepter themselves. The Eggmen appeared on Southern Island with their Egg Wizard, and gloated about their master plan before drilling into the ground. Deep below the island, in Deep Core, the Eggmen used the Egg Wizard to tap into the Power of the Stars with the Jeweled Scepter. After separating the newly-arrived Sonic and Blaze from Tails and Marine, Eggman Nega mocked Blaze, thanking her family for keeping the Jeweled Scepter safe for him to use to take over the world. However, Sonic and Blaze used the Chaos Emeralds and Sol Emeralds to become Super Sonic and Burning Blaze, and proceeded to battle the Egg Wizard.

Near the end of the final battle, as the Egg Wizard is about to be defeated, a gleeful Eggman Nega plans to use the mech's "Planet-Blaster Laser" to destroy Super Sonic, Burning Blaze, and the world, causing Dr. Eggman to panic. However, the Egg Wizard got distracted from an energy blast from Marine, giving Sonic and Blaze an opening to finish it off, thus foiling the Eggmen again.

Eggman Nega, being a descendant of Dr. Eggman, shares many similarities with him. Both are large humans with round, bulky bodies, thin legs, a bulbous pink nose, bald head, and a large mustache. Though his mustache is light gray, as opposed to Eggman's being brown.

For clothing, Eggman Nega wears a red jumpsuit with a gray, metallic-looking stripe up the middle. He wears a black military-style jacket over his jumpsuit, which has yellow accents on the shoulders, arms, and sleeves. Eggman Nega also wears yellow shoes with black stripes over them. Finally, he appears to be wearing blue sunglasses as opposed to Dr. Eggman's round-lens glasses, and also wears a pair of yellow test lab goggles over his bald head.

Having inherited Dr. Eggman's scientific traits and sneakiness, Eggman Nega is a cunning, cruel, power-hungry, and sinister individual who has ambitions of ruling the world with an iron fist. While the two are similar in many regards, it has been hinted at that Eggman Nega is quite different from his ancestor on the inside.

Eggman Nega keeps a cool head when facing against his enemies, remaining calm and composed and rarely letting his temper get the best of him. This results in him being cold and calculating, yet eerily polite in manner of speech, being a stark contrast to the more rude, loud, and short-tempered Dr. Eggman. Cold-hearted and lacking in empathy for anyone in his ambition's affect, he holds no concern for anyone other than himself, and even went as far as to mock Blaze in Sonic Rush and the imminent doom that awaited her world and its people. He likewise has a sadistic sense of humor and enjoys mocking his victims.

What mainly sets Eggman Nega apart from his ancestor are his radically different goals and ambitions. While Dr. Eggman simply wants to rule over the world with an iron fist, Eggman Nega is more interested in bringing destruction and chaos, outright destroying it and making it his "plaything". In fact, his interest in conquering the world seems to stem from a desire to bring down desolation and disorder to it. He also appears to be highly insane and lacking in common sense, even moreso than Dr. Eggman, being willing to succeed by any means necessary, even at the cost of the world or his own existence.

Eggman Nega in Mario & Sonic at the Rio 2016 Olympic Games 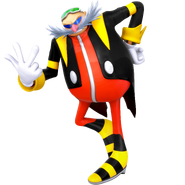 Render by Nibroc-Rock
Community content is available under CC-BY-SA unless otherwise noted.
Advertisement