Eggman's Apple Pie is a fighting game staring Dr. Ivo Robotnik (generally refered to as simply "Eggman"), who as usual is scheming a plan to gain world domination.

Robotnik has seemed to have had a change in alignment, and seeks peace with Sonic, his friends and the rest of the heroes. He offers a peace settling and to sign a treaty with them, and delivers a gift of homemade apple pie. But before Sonic can recover the pie from his doorstep, it is stolen by the cheeky Buffoons who run off and stuff a piece into each of their own and friend's greedy gobs. Unfortunatly the pie does not turn out to be the amazing gift it seems to be, the Buffoons start acting odd over the next few days and eventually become turned into Eggman's robot slaves, obaying his every will and beckon. The heros must escape the graspe of Eggman and his newly formed minions, and if they can recover an antidote to return the Buffoons to their orginal state mind.

Enemies and Eggman's minions are all NPCs in the game, until unlocking "Enemy Mode", in which you can play as any of them in the main gameplay levels but as the "baddies". Please sign up your characters by commenting including the needed information.

During each level there are 3 interchangable characters, much like on Sonic Heros. During the level you may switch between these 3 characters as you wish.

A cutscence appears showing Eggman baking a pie, he talks to himself, listing the names of the ingredients as he adds them to the concoction. Once his pie base is created and the filling inside, he holds a bottle with a unreadable label on; "See how they like this secret ingredient!" He chuckes as he pours the contents into the already placed filling. The cutscene fades out into a zoom in on Sonic, Ella and Red (your 3 playable characters for the first level) sunbathing at the beach, you automatically start playing as Sonic but at any stage can choose whichever character of the 3 you want to play as during this level. A bottle is washed up on the shore of the beach, your character must collect the bottle which contains a message inside, once you have collected the bottle you will see the message which reads:

I have seen the light and decided to no longer lead a life of evil and hate, and therefore would like to sign a peace treaty with you shortly. But my robots have gone rogue and refuse to obey their master, I pray you avoid them until I have time to reprogram them. In the meantime I insist you return home immediatly and consume the pie I have generously baked for you and left on your doorstep.

Dr. Robotnik (But I no longer mind if you call me Eggman, as a friendly nickname)

A cutscene shows Tails approching the trio, wondering what's up. They show him the letter and he warns them not to trust Eggman, but sees no harm in consuming his pie, as really what harm could come from eating a little bit of pastry? they decide to walk to Sonic's house to hold a party and share the pie between the guests. Tails joins your group (but you may not play as him) to tag along, you must find your way to Sonic's house along the busy highway. Tails will offer to fly you to Sonic's house by his plane, you must accept his offer and take control of the plane, avoiding various enemy craft attempting to shoot you which have "nothing to do with Eggman", if these enemies get close enough you may attack them with Red's sword. After about 2–3 minutes of operating the plane a cutscene will appear showing a group of Buffoons creeping over to Sonic's doorstep and stealing the pie and shoving it into eachother's mouths, a few of them are shown to be dizzy or holding their stomachs after consuming it. Your group arrives at Sonic's house only to find an empty pie tin with a few crumbs remaining, a Buffoon (with now red eyes) can be seen watching them ponder over what had happened from inside a distant bush.

Clyde, Emerald and David are your playable characters for this level. 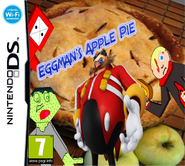 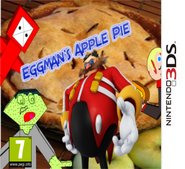