EggRobos are recurring enemies in the Sonic the Hedgehog series. They first appeared in Sonic & Knuckles as elite robotic soldiers built by Dr. Eggman to defend the Death Egg. One in particular became an adversary for Knuckles the Echidna, fighting him with machines similar to Eggman's while the doctor himself faced off against Sonic.

An EggRobo is a playable racer in Sonic R and Sonic Adventure 2, and the enemies later reappeared in Sonic Generations in Sky Sanctuary alongside a new black Missile EggRobo variant. In Sonic Mania, a squadron of Eggrobos is upgraded with the powers of the Phantom Ruby and become the Hard-Boiled Heavies.

Eggrobos also appear as enemies in the Smash Run mode in Super Smash Bros. for Nintendo 3DS and as Eggman's volleyball teammates in Mario & Sonic at the Olympic Games Tokyo 2020. 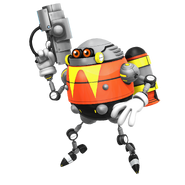 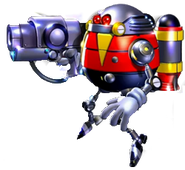 Add a photo to this gallery
Retrieved from "https://fantendo.fandom.com/wiki/EggRobo?oldid=3247008"
Community content is available under CC-BY-SA unless otherwise noted.