Eevee is a Normal-type Pokémon, extremely famous for the loads of evolutions it has. While not a "true" mascot for the series, it IS one of the more commonly-seen Pokémon in fanfics; unfortunately, owning an Eevee is often the stereotype of a "Mary Sue" character.

In the Generation 8 games, Eevee can Gigantamax.

In Pokémon Yellow, Blue's starter is an Eevee. This further evolved in the game's 2018 Switch remakes to Eevee potentially being your Starter in Let's Go Eevee. This special Eevee can't evolve and has a unique appearance as well as different stats; because it's a female Eevee, the unique appearance would go on in Generation 8 to become the default appearance for all female Eevees, making it one of a few rare Pokémon who did not originally have a gender difference to get one. This may also explain why Gary had an Umbreon in the animé.

Eevee is also a Starter in Pokémon XD: Gale of Darkness (Espeon and Umbreon are Starters in its prequel).

Base stats of the LGP/E Partner Eevee

A Female Eevee appears as a costume shop owner in the game. She can dressup in any costumes she wants to.

Eevee appears as a playable character in Pikachu's Final Destiny 2. She has to take down Jigglypuff for stealing her costumes she made and help Birdo to get back her purple dress from Jigglypuff. 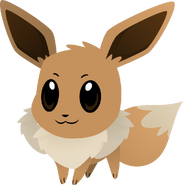 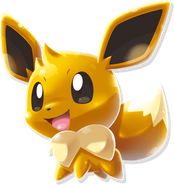 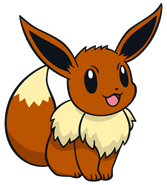 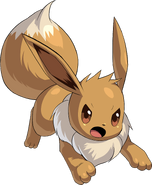 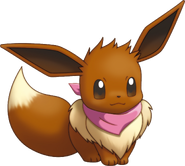