Eely Mouth is a character who, so far, has appeared only in Super Mario Sunshine, where he is a boss that Mario must fight to earn a Shine Sprite.

Unlike most other bosses, Mario's job isn't to kill Eely-Mouth. Instead, he must clean Eely-Mouth's teeth, which are somehow causing pollution that's poisoning the water of Noki Bay. His official art shows him as blue, but he appears more purplish in-game.

For extremely obvious reasons, Eely-Mouth appears in Super Mario Sunshine Deluxe, serving the same role he did in the original game. He was slightly redesigned to look more like a Maw-Ray. 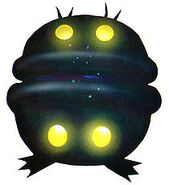