Edwardo is Waluigi's brother and is considered the 5th Mario bro, even though it's unknown if he is even related.

Edwardo looks a heck of a lot as Waluigi, up to the point of having the same mustache. However, the most notable difference is that his overall's are orange and white. In his first appearance, he also had shades, but that was because he was trying to be cool (Spoiler alert-it did not work).

Edwardo, unlike Waluigi, is kind and nice to his friends and relatives. He did inherit Waluigi's love of gold, however, and can be manipulated with a few $. He also tries to be "cool" by wearing shades every so often and speaking "cool lingo." Ironically, this makes him look like a dork. He also has a fear of Thwomps, Whomps, and Thwimps.

Edwardo makes his first appearance in Waluigi: Agent -5 in the Co-op mode. This is also were the glasses that he wears sometimes appear.

Super Smash Bros for Wii U and NX

While he does not make a real appearance in this game, Waluigi has a skin-swap that highly resembles him.

Edwardo appears as a Mystery Mushroom.

Edwardo gets along well with the bros. While he constantly questions them putting themselves in danger, he still highly respects them for there bravery.

While Waluigi sometimes annoys him, Edwardo is the one person that he can trust with his life. They both get along fairly well, and Edwardo considers him a good friend.

Wario thinks that Edwardo is a "Goody two shoes" and teases Waluigi for hanging out with him. Besides that, they don't interact much.

As usual, Edwardo thinks of Bowser as a threat to the Mushroom Kingdom. Bowser, however, does not know he even exists at times.

He has a HUGE crush on her, up to the point where it's painfully obvious and even she knows. However, Roselina sometimes shows tiny signs of her flattery towards him.

Every week, his house gets egged. He has three suspects who he thinks does it: Bowser Jr is one of them (The other 2 are Birdo and Wario. 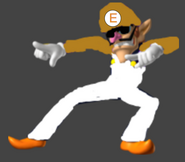 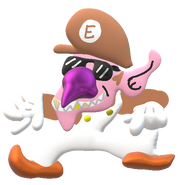 Poorly 3D modeled at the request of AgentMuffin (t∣b∣c)
Add a photo to this gallery
Retrieved from "https://fantendo.fandom.com/wiki/Edwardo?oldid=3065263"
Community content is available under CC-BY-SA unless otherwise noted.