Earth is a planet in the Fantendoverse where a number franchises take place, unlike the Earth of the real world, the Fantendoverse Earth has many alien species that reside on it and has a number of unusual features including a Distortional Mist that impacts the perception of particular locations. 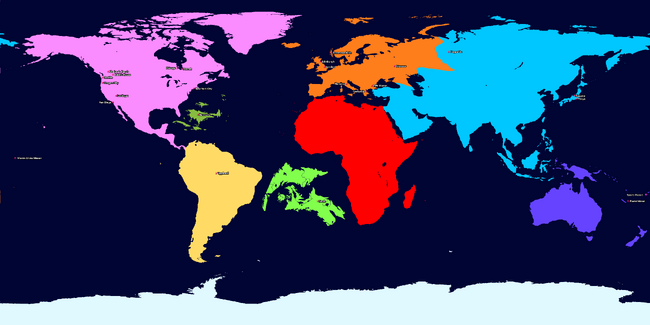 North America is a large North-Hemisphere continent that is under the control a multitude of countries, most notably; the United States of America, Mexico & Panama. Currently all known major locations in North America appear in the USA.

A territorial Continent, Europe along with Asia form the Eurasian Plate one of the largest tectonic plates in the world, there are many countries located in Europe most notably; Great Britain, France, Germany, Russia, Romania, Italy, Norway, Ireland, Spain & the Netherlands. The major locations in Europe are scattered in different countries.

Another Territorial Continent, Asia is the most populated continent on Earth with over a quarter of the population situated in it, primarily around the East and South areas of the Continent. It is comprised of several tectonic plates primarily the Eurasian Plate and the Indian Plate, it includes many countries such as; China, Japan, India, Indonesia, Vietnam, Nepal & Pakistan.

A smaller territory that appears in the southern Hemisphere, Oceania is notable for the many small islands that appear in its territory including three major islands; Australia, New Zealand & Papua. There is currently only one location in Oceania.

A new continent that features a design that seems to have been emulated albeit simplified by the White Goddess, Aeo is comprised of several small countries including; Kresthita, Marais & Aereus. There is currently only one location in Aeo.

Retrieved from "https://fantendo.fandom.com/wiki/Earth_(Fantendoverse)?oldid=2957130"
Community content is available under CC-BY-SA unless otherwise noted.