Not to be confused with MOTHER 3, which has been unofficially referred to as EarthBound 2.

EarthBound 2: Destiny's Call (known as MOTHER 2.5 in Japan) is a 2017 role-playing video game being developed by Brownie Brown, HAL Laboratory, and Creatures Inc. and published by Nintendo. Set several years after the events of the original game, Ness discovers his unlimited power and the accidental abuse of it is slowly transforming his body into a robotic one and the only cure is a potion made from the legendary Fruits of Foresight. Ness reunites with his friends and they set out into the far reaches of Eagleland as well as entirely new areas in order to locate the fruits before Ness becomes a heartless robot. However, they are not the only ones searching for the fruits as the mysterious Quakarma organization has framed the team for the disappearance of several individuals while still hunting for the fruits themselves.  Destiny's Call will be released on the Nintendo Switch during the third quarter of the fiscal year 2017 with its companion game EarthBound Origins being released sometime following the launch.

Destiny's Call plays similar to previous games in the Mother series with the player controlling four characters who explore the various regions of the game in search of the fruits. While in the overworld, the player witnesses events and controls the characters in a style similar to EarthBound [as opposed to the top-down perspective of Mother 3]; the overworld also allows the player to interact with objects, chat with other characters, obtain items, and brawl with foes. Winning battles against the enemies reward the party with experience points and sometimes money and items. Experience points will gradually build up and level up the characters, enhancing their stats, increasing their psychic points and health, and learning new abilities.

Similar to the previous two games in the series, enemies can be seen in the overworld and once they are bumped into, the game dissolves into combat mode. A circle will appear before entering battle with green meaning the party has the advantage, red meaning the enemy has the advantage, and a neutral circle meaning the battle will start normally. Battles typically begin with a planning phase where the party can choose to attack, heal, use an item, et cetera and then the enemy/enemies attack. Status ailments can occur on either side and a list of them is below.

New features in the game include an enhanced storage system ala Pokémon, which sorts the storage into GEAR [equippable items], KEY ITEMS [items required to progress the story], RESTORATION ITEMS [any item that restores Health and/or PSI/PK points], and MISC [other items]. Jeff also has a TECH section which gives him room to store items such as the Broken Trumpet, the Rusted Bear Trap, and other items. Along with this, the rhythm-based combos and dashing from MOTHER 3 return, albeit slightly altered.

Similar to Mother 3, the game is separated into eight chapters which focus on the main characters seeking the Fruits of Foresight in order to restore Ness - the leader of the party - back to a fully human state. All of the chapters are focused on a specific fruit, save for the first chapter.

It has been over 10 years since the fall of Giygas.

Ness awakens from slumber and looks out the window of his room for what feels like a new day for Eagleland and the young adventurer. He sees Onett finally rebuilt after years of hard labor by the Quakarma Organization, who chose Onett as the first location to transformed into their first ever Chronocity: a city or town that updates constantly with new technology similar to a video game. He relieves himself of his bed before leaving the house and setting out into the city.

After retrieving all of the Fruits of Foresight, the team heads back for Onett in order to create the cure

Once a humble teenager from the town of Onett, Ness discovered he was one of the Chosen Four, a group of people destined to save the world from the evil Giygas. He has now grown into a strong young man with powerful psychic abilities following his expedition across the world in search of the Your Sanctuary locations. An unfortunate side effect of this power is being the target of various organizations - notably the Quakarma Organization - who want to use his power for their own means. Now Ness reunites with his friends in search of the Fruits of Foresight in order to stop the spread of his mechanical infection.

Ness retains many of his PSI/PK abilities from EarthBound with the addition of PK Freeze and PSI Starstorm - two moves he is able to use in Super Smash Bros. games - and below is the level-up list for all of his moves.

Paula Polestar is one of the most gifted psychics in Eagleland and is known in the town of Twoson for her amazing usage of PSI/PK abilities. She is also the current love interest of Ness, causing some to believe her to be a typical girl until her powers are truly revealed. Now Paula and her family have become targets of the Quakarma Organization due to their relation to Ness and therefore their preschool has been condemned and Paula's parents to be sent into custody. Paula is the first to discover Quakarma's true intentions and gladly joins Ness on his adventure to find the Fruits.

Paula once again retains all of her PSI/PK abilities along with the Pray command. However, she now has access to two moves introduced in this game: PK Whirlwind [which deals constant damage to enemies] and PSI Slumber [which causes enemies to fall asleep]. Paula can also learn Healing, which returns from previous entries in the series. Below are her level-up list and Pray effects.

Jeff Andonuts is something of a child genius; from a young age, he was able to assist his father, Doctor Isaac Andonuts in the repair of various inventions until his father left his family at age 5. After his mother died several years later, Jeff was relocated to the Snow Wood Boarding School in Winters, which was ironically close to his father's laboratory. In his present form following his adventure with Ness, Jeff is under heavy fire from the police for being a key member in the disappearance of his own father. This once celebrated teen has now become a fugitive on the run.

While Jeff does not possess any psychic powers, he does gain the Tech ability in battle. The Tech ability allows him to construct buildings to protect his party and damage enemies. Jeff's abilities are only increased by either leveling up or learning it from various individuals and below is the list of abilities Jeff learns;

Once destined to be the next king of Dalaam, Poo's reputation was shattered by one of his own people: a mysterious figure only referring to himself as Yokuba, who told of the "malicious intentions" Poo possessed and was going to use upon his people should the current king die. Poo sought more information and stalked Yokuba for years until discovering he had murdered the Star Master; the prince responded by engaging Yokuba in a sword fight, which lost Poo his eye and leads to his public dismissal from the palace.

As with the other two party members with PSI/PK abilities, Poo retains all of his abilities from his previous adventure with Ness with the addition of new ability PK Time [this will stop all other party members and enemies from moving] along with returning abilities PK Ground and PSI Beam. Below is Poo's level up list.

A returning feature from MOTHER 3 is a bestiary, this time known simply as Battle Bestiary. It details weaknesses, strengths, abilities, and much more about various enemies and bosses. Hidden bosses are also included. For those who want spoilers, the hidden bosses are The King Pig Statue (from MOTHER 3), Giygas (from EarthBound), Giegue (from EarthBound Beginnings), and sans (from the game Undertale)

Those who download the game through My Nintendo will also receive a digital download of the soundtrack, otherwise known as Sweet Harmony: EB 2: Destiny's Call OOST.A physical release has yet to be announced.

On June 2nd, 2016, a companion game for the Nintendo 3DS was announced under the name EarthBound Origins. Origins features a story taking place before the events of EarthBound Beginnings primarily focusing on Ninten's parents George and Maria discovering Giegue (who would later become Giygas) and the first investigation of their disappearance. Four new characters are to become playable: Nicholas - the private eye leading the case, Ramona - Nicholas's girlfriend and psychic, Thomas - a chef who witnessed the disappearance, and Marcus - Nicholas's childhood friend and college student. A new mechanic in the game is countering, which allows the party to counter enemy attacks by pressing

Ness standing in his room.

Varik and Everdred working together. 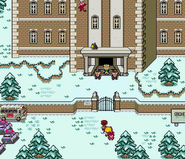 Outside of Snow Wood Boarding School.

Dalaam Palace exterior.
Add a photo to this gallery

Trying to talk to Varik

Against one of the hidden bosses.

Porky's pre-battle dialogue (#2)
Add a photo to this gallery

Poo
Add a photo to this gallery
Retrieved from "https://fantendo.fandom.com/wiki/EarthBound_2:_Destiny%27s_Call?oldid=2316568"
Community content is available under CC-BY-SA unless otherwise noted.