EONS is a robot capable of finding Hyper Mode Orb frequencies and tracking them down. He was a former Lucent, but his mind was transferred into a robotic body. He chooses to serve under Watermelon Tourmaline, having seen his species fall into corruption but unable to speak so under the assumption he would be killed for speaking his mind.

EONS is a robot made of pink spheres and ovoids with a floating set of limbs and head. He has a display for his eyes as well as able to shine light through his hands. His hands have three digits each. He is also able to display multi-colored circles of light, which allow him to light up rooms colorfully or summon various light beams to attack. On his forehead, his name can be seen to the right.

EONS wants to be helpful and is frustrated when he can't be. He is beyond others in years, although he never assumes he's smarter than anyone except in the field of Hyper Mode Orbs. He is not above making wisecracks, although a quick retort renders him silent. He is afraid of seriously speaking his mind, sometimes withholding information if he feels it will be unpopular. He is never malicious, although he can be somewhat intimidating to talk to.

EONS was formerly a Lucent named Opal, although his game was chipped and he risked dying. Due to his age and importance in the Lucent society, his gem and mind was transferred into a robotic body. While EONS could technically come back in his Lucent form, he would seriously risk his life and could possibly kill himself in the regeneration process.

As he saw the Lucent society grow, he became concerned with the process of gathering Hyper Orbs, taking it from species who had stumbled on the orbs without knowing how to use them. He never spoke his mind, as he felt like they could pull the plug on his for daring to speak out. This changed when he met Watermelon Tourmaline, who shared similar thoughts to him. The two went out to find fighters cabable of using Hyper Orbs to take on the Lucent empire.

EONS is a robot powered by a Opal gem. Being a Lucent creation, he can utilize one of the many powers he had as Opal, being able to generate rainbow light in the form of dots. He could use this to light rooms, blind opponents, or create multiple colored lasers capable of harming opponents. It's implied he had much more powers as Opal, and he could technically return as Opal but due to his chipped gem, he is at serious risk of cracking and dying. Should the regeneration process go wrong, it could kill him. As such, this is a absolute last resort for him.

He is able capable of tracking frequencies for Hyper Mode Orbs, being able to track them down across light years. He is unable to know who they were meant for, and can be led astray by similar frequencies, leading to altercations with Lucents wanting to stop him and Watermelon Tourmaline. 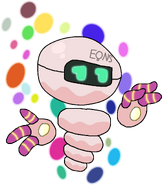 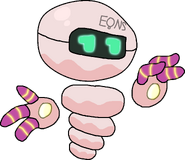