E-123 Omega (“Ω”) is a character in the Sonic the Hedgehog series. He is a member of Team Dark and was made by Dr. Eggman as part of the E-Series. He is an ally of Shadow the Hedgehog and Rouge the Bat and hates Eggman because he was betrayed by him and deactivated.

Omega will appear in Sonic Dash as a support character to Sonic, alongside Shadow.

Omega, along with Shadow and Rouge, can be seen staking in Penguin Kingdom of the game. One cutscene shows him almost got hit by the Soul Stars, he then blasts all the Soul Stars away.

In a recent teaser trailer for KH: A New Beginning, Omega was seen being summoned into battle by Dr. Eggman, then seen again in Hollow Bastion battling a army of Heartless. This may state that Omega starts off as a villain, then becomes a good guy.

Omega will be playable in Sonic Battel 2. He isthe third strongest wich makes him  a power type that.He is also the slowest charcter. His special attack is Omega Strike.

Sonic Riders to the Extreme

Omega is Playable in Sonic riders to the Extreme. He is a heavy weight and the second heaviest. He is the slowest with some above Average Handiling

Omega appears as a rival in boxing at the Athens 2004 Olympic Games and as a playable power type character at the Dream Olympics.

Omega appears as a guest character alongside Sonic, Shadow and Knuckles. 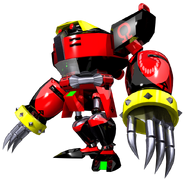 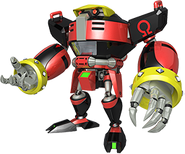 Omega as he appears in Sonic Riders To the Extreme 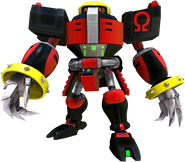 Omega in Team Sonic Racing
Add a photo to this gallery
Retrieved from "https://fantendo.fandom.com/wiki/E-123_Omega?oldid=3337353"
Community content is available under CC-BY-SA unless otherwise noted.