After capturing Amy Rose, Gamma had to keep her locked up so she wouldn't escape. Amy soon tells Gamma about friendship. Gamma soon wishes to defeat his creator and to release the animals from his other brothers, E103-Delta, E104-Epsilon, E105-Zeta and of course, E101-Beta. He successed, with the only things destroyed were his brothers and himself. Soon, the Flickies that were freed were revealed to be Amy Rose's blue bird family.

Gamma appears as a secret character in Sonic Shuffle, revived with "the power of dreams".

Gamma doesn't really appear in Sonic Battle, it's revived as the Chaos Gamma, with has two arms instead of one hand and a rocket launcher. It also has other weapons too.

The newcomer to SSB Theta, Gamma got the place he so deserved in the line-up.

Gamma appears as a Chaos card in this game. The Gamma is a prototype, as said by the description. 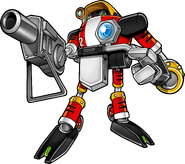 Add a photo to this gallery
Retrieved from "https://fantendo.fandom.com/wiki/E-102_Gamma?oldid=3242763"
Community content is available under CC-BY-SA unless otherwise noted.