Dupmal is a ghost and the main protagonist in the Dupmal Series. He is a black ghost that looks extremely similar to Doopliss. He possesses many supernatural, ghostly powers. His best friend is named Sweetster. 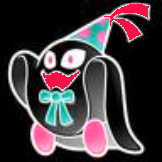 Dupmal
Add a photo to this gallery
Retrieved from "https://fantendo.fandom.com/wiki/Dupmal?oldid=1721685"
Community content is available under CC-BY-SA unless otherwise noted.