Dunsparce are pale yellow, serpent like Pokémon whom have two very small, white-colored wings capable of carrying it a bit above the ground. They also have a drill at the end of it's tail, this is for digging, this looking somewhat very similar to a rattlesnake's rattle. Dunsparce also has some more coloration besides pale yellow, they have some light-blue for their stripes and also circling around their eyes, and also some kind of white beige coloration for their eyes and on their back.

Dunsparce is based on the mythical Tsuchinoko, a serpentine cryptid of Japan. Similar to Bigfoot or the Chupacabra, sightings and reports appear in Japanese media; however, hard evidence is always lacking. Tsuchinoko are 30 cm to 80 cm long, with a large head and poisonous fangs. Its body is thicker than its head and tail. The noises it makes resemble squeaks, chirps and snores. Unlike real snakes, which slither from side to side, a Tsuchinoko wiggles ahead in a straight line. The Tsuchinoko curls its body to leap through the air. Moreover, the fact that Dunsparce, a snake-like creature, has wings also brings to mind the motif of the Feathered Serpent, a prominent deity or supernatural being in many Mesoamerican religions. In addition, Dunsparce shares some traits with bumblebees, including their stripes, tiny wings, stinger-like tail, and the fact that they burrow into the ground. This may be a visual pun inspired by the name "bachi hebi" (literally "bee snake"), which the Tsuchinoko is also known by.

Dunsparce may be a combination of dun (grayish yellow or gloomy) and sparse (referring to its rarity). Nokocchi is an anagram of つちのこ Tsuchinoko, a fabled snake-like creature. 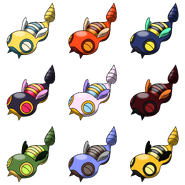