Dry Bones are undead Koopa Troopas and enemies in the Mario series of games. They are skeletal Koopas with gray shoes, and usually walk on two feet. Being undead, they are quite difficult to kill, as jumping on them will result in them rebuilding themselves. They are most commonly found in deserts, but also appear in castles. There are a few variations, including Red Bones and Dull Bones.

Dry Bones appears as one of ten subs. He has all balanced stats and has no special skills at all. He is only used when a player on the Mario All Stars team is injured.

Dry Bones appears as an unlockable character and is officially paired with Vomer.

Sloppy Dry Bones makes an appearance in Super Sloppy Bros. as a common enemy in castles, fortresses, and ghost houses.

Dry Bones is a playable character in the Koopa Kart series in every game, being one of seven characters to appear in every game (the other six being Bowser, Koopa Troopa, Hammer Bro, Goomba, Monty Mole, and Paratroopa). He is a heavyweight driver in the first four games, while he is a lightweight starting from Koopa Kart DS. In Koopa Kart: Double Trouble!!, his partner is Hammer Bro, and their Special Item is the Blue Shell.

Mario and Sonic at the Dream Olympic Games

A darker version of him, Dark Bones, appears as a playable power character in this game.

His Undead Buddy Joins the Party

A skeletal version of a normal Koopa is much faster and light, if he's not being stuffed with meat.

Dry Bones are a very common enemy in this game and are one of the main soldiers of Evil Bowser also a Humongus Pet Dry Bones with the stance of a Shellcreeper from Mario Bros. is his main soldier

Dry Bones appears on his mini skeleton kart in World 6; Kart Racer as a Tower boss. He has a sharp point on his head so you'll have to destroy the kart by freezing the motor 3 times then it explode and Dry bones will lose his pointy top and Mario will land on his head to disable his bones.

Dry Bones is the main character in his self-titled game, Dry Bones: An Undead Koopa's Revenge, where he is the only playable character in single player mode. In this game, Dry Bones has to collect the Lunar Mushrooms to get his revenge on Bowser for forcing him and the rest of the Koopa Troop to be his slaves. During gameplay, Dry Bones can use guns, which deal more damage than melee attacks. 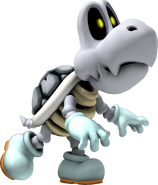 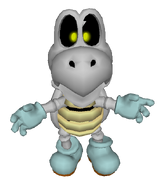 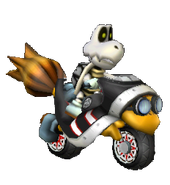 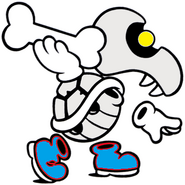 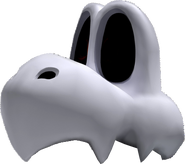 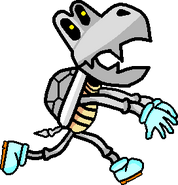 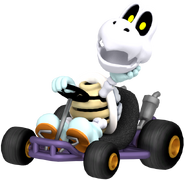 Dry Bones in the Pipe Frame by Nintega-Dario 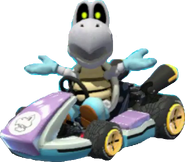 Dry Bones with the Standard Gun in his self-titled game, Dry Bones: An Undead Koopa's Revenge. 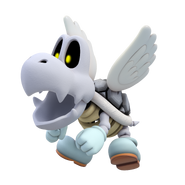 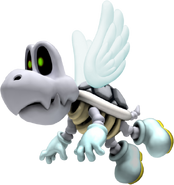 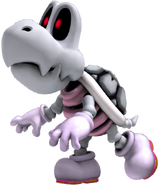 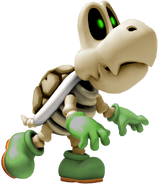 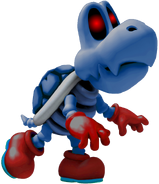 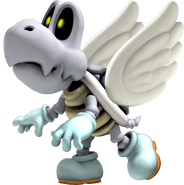