Drifloon has a spherical, purple body with two stringy arms that have yellow, heart-shaped hands on the ends of them. At the base of its body is a frayed protrusion that resembles the tied end of a balloon. In the very center of its body is a yellow tape-like "X", which contains its small mouth in the very center. Located on either side of the "X" are its small, black eyes. A white mass of fluff that resembles a cloud sits on top of Drifloon's head. Additionally, shiny Drifloon are yellow instead of purple, and have a light blue patch and hearts. Also, there are no gender differences between male and female Drifloon.

Due to its aimless drifting, this species is known as "Signpost for Wandering Spirits". It has been known to steal children that mistake it for a regular balloon. However, due to its light weight, it can be resisted easily and is often pulled around. Although created by lost spirits of Pokémon and people, as seen in the anime, it can be friendly and helpful. It prefers to reside in damp, humid locations and can expand or shrink to express its feelings.

Drifloon are based on balloons. They also resemble comb jellies, specifically tentaculata.

Drifloon is a combination of drift and balloon. 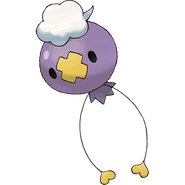 Add a photo to this gallery
Retrieved from "https://fantendo.fandom.com/wiki/Drifloon?oldid=3200800"
Community content is available under CC-BY-SA unless otherwise noted.