Drengenox (also known as Dreggy or Ring Dragon) is a deity that guards the Upsetting of the Dimensions, which appears as a small glass orb with swirling red matter in it. He is currently the wielder of such Artifact of Ascendancy and his ring-like body allows him to lie down and guard it. It is unknown how he came into possession if it.

Drengenox in a sense, is a ring shaped dragon with messed up scale of his limbs which are placed kind of randomly. He can stand on one limb at any given time. as well as float. He can disconnect himself but generally he sucks at mobility. He has techno lines all over his body which may be his power residing inside of him.

Drengenox is actually kind of chill. He doesn't like to fight, he just likes to take naps and write down dreams he has. When it comes down to it though, he seems totally uninterested in fighting because of his immense power. He seems interested in the idea of a romantic relationship but hasn't met anyone that's actually cool with him sleeping all the time. 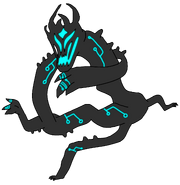 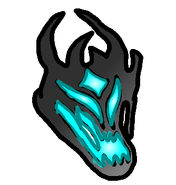 Drengenox Mask in the Dark Woods Series.
Add a photo to this gallery
Retrieved from "https://fantendo.fandom.com/wiki/Drengenox?oldid=3210710"
Community content is available under CC-BY-SA unless otherwise noted.