Dreadgon is a playable character in Sparkplug. He is a robot who was made for scaring other robots and is one of the few Sparkplug characters that is actually competent at the purpose they were built for. He later appeared as one of the antagonists in Mechanized Cooking Prophecy.

Dreadgon is a dragon-like robot, although he lacks wings, so one could argue he looks more like a drake. His head has a large jaw with teeth (being the only playable character to have a visible jaw), and a visor surrounded by black metal where Dreadgon's two glowing red eyes sit. His neck and the rest of his body is spine-like, consisting of sharp metal structures connected to eachother by dark grey pipes. His arms are connected to the second "vertebrae" from the head, and they connect to the hand which are grey prisms with three sharp claws. His legs are connected to the fourth "vertebrae" and look similar to the hands, except the claws face forwards instead of below. His tail consists of vertebraes stacked in front of eachother, getting progressively smaller. He is also by far the biggest character in the Sparkplug cast, being almost as big as the smaller bosses.

Dreadgon knows he looks very scary, so he spends a lot of time scaring the other robots; he enjoys doing this. This leads to most of the robots being outright terrified of him and avoiding interacting with him at all costs. The few robots who do interact with him on a regular basis include Incinerator, since both are brutes, and Microwave, who often teases him and calms him down when he goes on a "scare rampage". He hates the latter's taunts to the point he tried to get "revenge" on her (although this revenge attempt ultimately failed). Although most of the robots think Dreadgon is pretty stupid, Dreadgon is smarter than he looks, although he's certainly not a genius either. Dreadgon is very hard to scare himself, and even in more tense parts of Sparkplug's story he was able to keep his cool. He seems to care a bit about his appearance and was annoyed when he got stuck in a jester outfit at one point in Sparkplug's story.

Dreadgon does not have any wild and out-there abilities, but his strong physical strength and his scary appearance are all he needs to be a threat. Just his glare is enough to lower the damage of nearby foes. He is slow, but he has good bulk and amazing attack. He can increase his own attack even more for a short time, and also has access to attacks like a giant bite and a frenzy of slashes. Finally, he can roar loudly to shock foes and slow them down. However, Dreadgon does not have access to projectile attacks, which can give him trouble when fighting speedy foes. 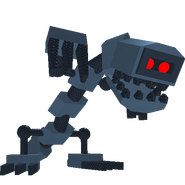 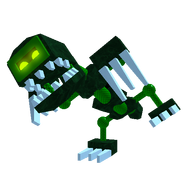 A reference sheet of Dreadgon, showing various angles and details about him. 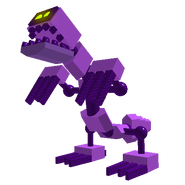 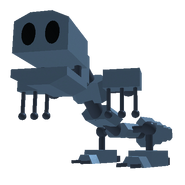 Dreadgon's Dreddy skin from Sparkplug.
Add a photo to this gallery

Retrieved from "https://fantendo.fandom.com/wiki/Dreadgon?oldid=2634518"
Community content is available under CC-BY-SA unless otherwise noted.