Drake Koopa is a naive, young koopaling who is a minor antagonist in Kingdom Fall. He was one of the koopalings that were corrupted. He is the 3rd party member after Aiva and Iggy.

While arrogant and a bit chaotic, Drake is shown to be really nervous when he's not around Alex. Due to his age, he's also a little naive and curious. When at home, he has a strange obsession with race cars and he pretty much talks about them almost all the time. Drake also has a tendency to become angry quickly before he starts crying from being too angry.

While in his paper form, he appears to be around the size of Lemmy, most likely due to his age. However, in Kingdom Fall, he pretty much appears to be about normal height for his age. His head color is the same as his body color. His eye color are tealish. He has a purple side cut hair style. His shell is purple with tealish rings. On his left arm, he appears to have bandage wrappings above his wrist band. He has a large tooth that sticks out from the middle of his maw.

As stated, he was originally corrupted. He pretty much guards the koopas that were taken as hostage if they rejected corruption. While he's very weak, Drake does have the ability to paralyze your team. Once purified, he is the 3rd party member, who is notable for paralyzing enemies in battle.

His currently only known family member is his adoptive brother. He is known to have a brotherly bond with him when Drake was very young. Once Alex became older and focused more on his piloting career, Drake started to become sadder that his brother wasn't talking to him as much.

In Kingdom Fall, after being purified, he quickly grew closer to Jr, even stating that he reminds him of his brother. Drake began to realize that he could become friends with koopalings around his age and that Alex was just getting older. 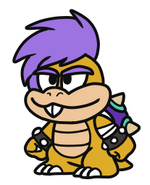 Paper Drake
Add a photo to this gallery
Retrieved from "https://fantendo.fandom.com/wiki/Drake_Koopa?oldid=3273530"
Community content is available under CC-BY-SA unless otherwise noted.