Dragonite, known in Japan as カイリュー (Kairyu), is the first known pseudo-legendary Pokémon in existence, and is of the Dragon/Flying type, originating from Kanto. Dragonite evolves from Dragonair when reaching level 55, and is the final form of Dratini.

Dragonite is a firmly built, bipedal dragon with a light orange skin, contrasting its previous form which was serpentine, limbless and dark blue. Dragonite has long, thin antennae on its head as well as a triangular spike. It has large black eyes with white sclera. Dragonite has also developed a set of small wings, which have a sea green underside. It has three claws on each hand and three claws on each foot. Its belly, tail and throat has light yellow, segmented scales.

Dragonite is said to live around bodies of water, such as lakes or oceans. It is such a rare sight, however, that even its living location is just a rumor. It's even rumored that many Dragonite actually gather on a small, hidden island where exclusively these Pokémon live. Dragonite is a kind-hearted Pokémon that saves people from drowning and directs lost ships back to land (which has it dubbed as the Guardian of the Sea), and its intelligence is equal to that of humans. Despite its bulky physique and its small wings, it can fly freely past raging seas without any kinds of trouble. In fact, Dragonite can actually circle around the globe in only 16 hours by flying.

Dragonite resembles Japanese sea dragons, European dragons or even "fairy dragons". Dragonite being described as the "Guardian of the Sea" makes its behavior similar to that of Chinese dragons.

Dragonite may come from dragon, and either knight or night. It may also come from draconite, a mythical gemstone said to be located on certain dragons' forehead, and triangularly or pyramidal in shape. 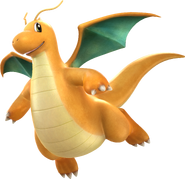 Generation VI
Add a photo to this gallery
Retrieved from "https://fantendo.fandom.com/wiki/Dragonite?oldid=3080351"
Community content is available under CC-BY-SA unless otherwise noted.