Dragon Wario is a form of Wario that debuted in Super Mario Land 3: Wario Land. It allows Wario to shoot a stream of fire from the hat at the loss of the Barge ability.

Sea Dragon Wario is an alternate form of Dragon Wario that debuts in Virtual Boy Wario Land. The power-up requires the Dragon Crystal. In this form, Wario can shoot fire in a sort of cloud right in front of him. Wario is lighter in this form, and can get out of quicksand fairly easily. Wario also forfeits his usual Barge attack in favor of using the fire, meaning he needs to crouch down and shoot fire to defeat many enemies, as he is taller than many of the enemies in this game.

In Super Wario & Kirby Maker, this form is faster underwater, acting somewhat similar to the Frog Suit. When Kirby inhales it, he gets the Beam ability.

King Dragon Wario is an alternate form of Dragon Wario that debuts in Virtual Boy Wario Land. The power-up requires the Dragon Crystal and an Eagle Statue. In this form, Wario can fly very far, normally to the end of the screen. Wario is very heavy in this form and it is difficult to get out of quicksand. Wario can preform a ground pound in this form instead of a Body Slam. Wario can not Barge in this form, however he can shoot a flame projectile which will often continue until it reaches the end of the screen, regardless of obstacles. Despite needing two power-ups for this form, both the required power-ups are fairly common and this form is often not hard to obtain.

In Super Wario & Kirby Maker, this form is faster than the Sea Dragon and regular Dragon Wario in the air, and has a bigger ground pound damage radius.

Ice Dragon Wario is an alternate form of Dragon Wario that debuts in Lets-a-go, Mario. It is Wario's ice form. In this form, he doesn't slip on ice and can have his hat breathe a stream of ice which freezes any enemies hit by it.

The item appears in Lets-a-go, Mario, as well as its alternate form, Ice Dragon Wario.

In this MMO, Wario may don this hat if flagged as hostile against enemy players.

Wario is able to don his Dragon hat in this battle royale game by Lunatic Entertainment.

One of the several power-ups in the game, usable by Wario, Waluigi, and Ashley. When Kirby inhales it, he gets the Fire ability.

Dragon Wario appears as a costume for Wario. When selecting the character hold down the left control stick to the left to turn Wario into Dragon Wario. 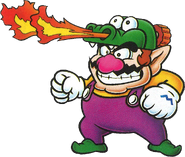 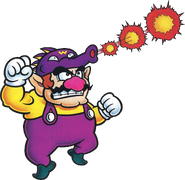 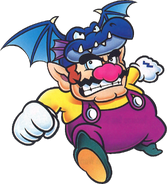 Dragon Wario with the other Fire characters in Lets-a-go, Mario

Ice Dragon Wario and Ice Rosalina in 0-1 of Lets-a-go, Mario 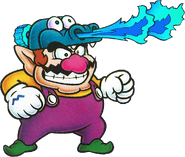 Retrieved from "https://fantendo.fandom.com/wiki/Dragon_Wario?oldid=2648869"
Community content is available under CC-BY-SA unless otherwise noted.