Dragon Queen is a character that debuts in Super Smash Bros. Discord as a brand new starting character for beginners. Said to be from a long line of fighters known as the Dragon Kings, the Dragon Queen is the first woman to take the title. The character was created by Helena Harper (t∣b∣c) as a new starting character for beginners for the roster, as Mario in Super Smash Bros. Discord had been reworked to the point where he no longer felt like this for newcomers to the franchise.

The character's reception has been overall positive despite the initial controversy.

Dragon Queen is a red haired woman with dark skin. She has four prominent horns on the top of her head and a set of wings that reflects what elemental ability she is tapping into- by default, this is fire. She can also tap into ice, which will create giant ice crystals between her wings, earthly green crystals for the earth element, and thunder for the thunder element. She wears an orange gi with a black binder around the torso, which is tied together with blue and red rope. She wears black baggy pants that are deceptively freeing for movement, and has blue soled shoes. Additionally, she has an orange dragon tail.

Despite her royal title, Dragon Queen lives the fighters lifestyle of going around, looking for worthy opponents to take on to make herself tougher and stronger. She has a habit of being rather lazy and shirking her own responsibilities that extend past fighting, being somewhat goofy as well. Over the course of the story of X Marks the Spot, she matures somewhat and takes the expectations placed upon her more seriously.

Dragon Queen considers herself a relative newcomer compared to the individuals around her and takes their criticism rather seriously, taking any kind of insult to heart. She does not linger on compliments or praise too long, as she does not see herself as worthy of that kind of thing initially. One could say she's powered by spite and the feeling of wanting to overcome her failings.

Dragon Queen appears in Super Smash Bros. Discord as her debut appearance, appearing as the very first character in the default selection of characters. This is due to her placement as an original character to the Smash universe as well as her role as a beginner's character. Dragon Queen's simplicity is very deceptive- through customs, she can become a wildly different character due to her elemental shifting abilities, which are shown through her wings. As such, she best illustrates the kind of movement shifts that can now occur with customs. Dragon Queen is also one of the many characters to have a jump hold, which allows her to flutter slowly while in the air, slowing her descent. As such, Dragon Queen is more or less the perfect character to illustrate the changes to the battle system of Discord while also introducing both new and old players to how to play the game.

Her role in X Marks the Spot is currently unknown, although it is known she will go through character development over the story's arc.

Dragon Queen makes an appearance in Nintendo All-Stars Chess as a Hero Piece in the game. She shifts her movement over the course of turns on the field. She initially starts moving like a Queen, then in the next turn she moves like a Rook, before moving like a Bishop in the turn after that. The next turn after that she will act like a Queen again, playing through these movement changes in a three turn loop. This ability is a reference to her own shifting abilities.

Dragon Queen makes an appearence in Super Smash Bros. Something. Unlike other appearences, she is an unlockable character, due to being added late into the game's development. Her moveset is largely unchanged from Discord, however due to the exclusions of custom moves she only attacks with fire. She is the last character fought in the All-Star Tower. In War of Dimensions, she makes a sudden appearence near the end of the story, once again due to how late she was added to the roster. She appears before the final fight against Corrupted Emelga, destroying the core and preventing her from reaching her max power. She participates in the final fight, and escapes the Shadow Fortress alongside the other fighters. In Super Smash Bros. Something Deluxe, Dragon Queen's rival is Captain Falcon, as both characters fight primarily with fire, and are both based off of Dragon King: The Fighting Game, the original concept for Super Smash Bros.

Dragon queen makes a appearence in Super Smash Bros Accelerant as a starter and one of ''The original 8'', also with a redesign. She appears in the prologue: An assasin from another world, with the 4 main protagonists, also with Gangeem, Shadokon and Emelga. Her moveset is largely unchanged from Discord, however due to the exclusions of custom moves she only attacks with fire. Her redesign is this:

Dragon Queen has dragon based abilities, which alter depending on what element she taps into. She can currently tap into the Fire, Ice, Earth, and Thunder elements, although it is hinted she can tap into more if given the proper training. These alter her wing designs, giving the player clear visual indication of what move she is using. 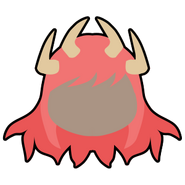 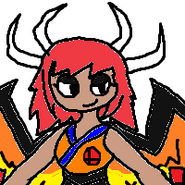