Fantendo - Game Ideas & More
Register
Don't have an account?
Sign In
Advertisement
in: Free to use Characters, Characters, What is the New Fantendoverse?,
and 17 more

DragonMan (also known as Dragon Man, Dragonman) is a robot hailing from a mine called 4.5, who was created alongside PalmMan and MineMan. He is a recurring character throughout the PalmMan series, his relationship with PalmMan varying between friend, apprentice and love interest between his different appearances and incarnations.

He first appeared in the PalmMan game and was originally created by COKEMAN11 (t∣b∣c).

DragonMan is a purple humanoid robot. He has yellow eyes and light reddish hair when he's not wearing a purple knights helmet. He has a purple blaster that spits out fire on his left arm, while his right hand resembles a human hand (up until Victory, where he got it replaced with a robot arm similar to that of Aran Leverletto/Alcyone, albeit slightly sharper). He usually has an armored look to him.

DragonMan has very little sense of humor and is considered "pretentious" from time to time. He is audacious when it comes to talking to other people, making it fairly apparent if they're doing something he finds bothersome. He has overtly elaborate justifications for some of the weirder things he does, which nobody really buys into. He's also incredibly deadpan. Despite this, DragonMan is a fierce fighter and genuinely cares for PalmMan.

DragonMan was created alongside PalmMan and MineMan. He is kidnapped by MineMan several times, who intends to dismantle him, so PalmMan headed out to stop that fate from happening. After defeating MineMan, PalmMan and DragonMan set out to Earth. During the course there, PalmMan and DragonMan were accidentally separated. DragonMan crashed far away from PalmMan, however the two united sometime after the Fantendo Now episode Metamorphosis.

PalmMan, DragonMan, and MineMan were all created on Earth as part of a government program called the T.R.I.A.D sometime during the Cold War. Intended to be used as super soldiers in the case of a Soviet Union attack, each had their own specialties. PalmMan was intended for land combat and could lob napalm and camouflage himself. DragonMan had built in flamethrowers and could stand insane wind speeds to take down planes. MineMan could float in water and drop mines in the water. MineMan's programming went rogue thanks to The Darkness, which infected his mainframe and told him to head to space with PalmMan and DragonMan.

On a planet called 4.5, MineMan became the ruler of the planet and constructed more robots using the resources. Things went MineMan's way for a long time before DragonMan became rogue himself (for some currently unknown reason that will probably be revealed in 3.14 Worlds) and MineMan sent him to be dismantled, fearing that he may attack. Shortly after DragonMan was sent off, PalmMan also became rogue and had realized that he was in love with DragonMan.

After going on a perilous journey to rescue DragonMan, MineMan called upon Pegasus, a god, to keep PalmMan away from rescuing DragonMan. PalmMan defeated Pegasus and was able to stop MineMan, who told him of their origins. PalmMan and DragonMan headed back to Earth to find their origin spot, out of uncertainty of what MineMan told them and to see if they could become peaceful robots instead of war machines. 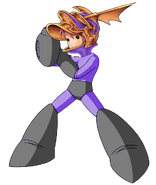 By Exotoro (t∣b∣c)
Community content is available under CC-BY-SA unless otherwise noted.
Advertisement