Draconids are half-dragon, half-humanoid species native to Arcania in the Draco Duel series. Draconids are a unique species with the capability to transform between a humanoid form and a dragon form at free will.

Draconids have been known to inhabit Arcania as long as the continent has existed, descended from human settlers from outer space that gained dragon-like features through adaptation after thousands of years of navigating Arcania's tough and treacherous terrain.

Draconids are a vastly differing species but almost all have both human and dragon DNA, which means their human and dragon forms have many similarities. Personalities and traits such as elemental powers are carried between these forms.

Greatly resembling humans, the human forms of Draconids are fairly similar between members of the species. All Draconids have two eyes, a nose, a mouth, four limbs and skin like humans do. Most Draconids also have hair, the colour of which vastly differs between individuals. While these forms are mostly the same as humans, their is one key difference, which is that all Draconids have two hearts. One heart supplies blood around the body, while the other supplies the body with Etherium, a magical substance which is the very essence that allows Draconids to change their forms.

Dragon Forms of Draconids are much more varied than the human forms, as every Draconid has a wildly different Dragon Form to another. However, most Draconids' Dragon Forms come under three categories: Drakes, Wyverns and Serpents.

Selesté, an example of a Drake.

Dimentra, an example of a Wyvern. 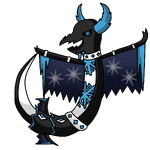 Frostspark, an example of a Serpent.
Add a photo to this gallery

The Draco Duel franchise features many Draconid characters, including playable and non-playable members of the species.

Any page that has [[Category:Draconids]] on it will be added here automatically.

Retrieved from "https://fantendo.fandom.com/wiki/Draconid?oldid=3198015"
Community content is available under CC-BY-SA unless otherwise noted.