Dr. Wright is a major protagonist from the 1991 SNES title Sim City. While he doesn't appear in any other Sim titles, he does appear as an Assist Trophy in Super Smash Bros. Brawl and Super Smash Bros. for the Nintendo 3DS / Wii U. Despite originally appearing in the SNES SimCity title, a series owned by EA and Maxis, Nintendo developed the title in which he debuted and owns the rights to the character.

Dr. Wright appears as an Assist Trophy character in Jake's Super Smash Bros.. When he appears on the stage, Dr. Wright summons large skyscrapers from the ground, which launches nearby fighters upwards. Dr. Wright is one of the two characters from Nintendo's SimCity title to appear in the game as an assist character, alongside that game's version of Bowser. 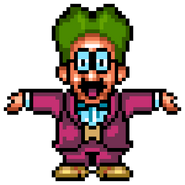 Mr. Write from The Legend of Zelda: Link's Awakening

Dr. Left from The Legend of Zelda: Oracle of Seasons