Fantendo - Game Ideas & More
Register
Don't have an account?
Sign In
Advertisement
in: Free to use Characters, Ink's Stuff, Characters,
and 14 more

You might be looking for the original Sunnyscythe, who can be found here!

“N-no! I'm just a sweet little Pichu! And you're being mean and boooriiing! I'm the boss here, so you better obey me and admit that everything I say is right! Or I'll gut you!”
— Dr. Sonny, throwing one of his usual tantrums

Dr. Sonny Scythe is a surgeon and chemist with a profound interest in deception and misdirection. He is an elite member of the Twisted Cross and the lowest-ranking member of its Bloody Cardinals.

He is Omega Prime's version of Sunnyscythe.

As a Mimikyu, Sonny hides his pitch black body behind an elaborate disguise. This disguise is designed to look like a Pichu, with large triangular ears and reddish spots on its cheeks. His real body can be seen peeking out from under the disguise, though; it has a pair of eyes peeping out from holes on the chest of the "Pichu," and tiny black tentacle-like appendages can be glimpsed sticking out from under the hem of the disguise. He will sometimes extend a large black claw from underneath this disguise when he needs to grab or push something. Unlike most Mimikyus, Sonny's claws have a thumb. He has sewn a bow tie and a pair of swirly "glasses" onto his disguise to try and look more doctoral and intelligent.

Doctors are often associated with maturity and composure, especially when the lives of others are in their hands. They are responsible, caring, and genius. It should go without saying, then, that Sonny is none of these things. Though he has never shared his age, most of the Twisted Cross has assumed that he is nine because of just how childlike he acts. He is mischievous and playful with little regard for others' feelings, thinks he is entitled to treatment befitting royalty just because of his status in the Cross, and will never avoid speaking his mind if he has something he wants to say regardless of how stupid it may be. When enraged, he will even throw a temper tantrum, becoming even more bratty, reckless, and deadly than before. All this makes him one of the least respected members of the Twisted Cross, but also one of the most feared.

"Sonny has the unique ability to shapeshift into different forms (mostly Pokémon) at will. Each form comes with its own special abilities in battle, and he possesses complete mastery over every one!" That's what Sonny likes to make his enemies think. By using hallucinogenic gases and an assortment of disguises and props, he tricks them into believing that he is a demonic shapeshifter so that he can scare them into submission. In actuality, he's just an ordinary Mimikyu with no exceptional powers except his ability to use the head of his disguise as a one-time shield.

Even when his tricks are revealed, however, Sonny is immensely dangerous thanks to his props. Using some sort of pocket-dimension storage device comparable to cartoon Hammerspace, he is able to carry an absurd number of weapons of mass destruction inside the folds of his little Pichu-inspired costume. His personal favorites include a taser, a bonesaw, TNT, a jetpack, a near-limitless supply of scalpels for throwing, a flamethrower, and some sort of colossal plasma cannon.

Like all the Bloody Cardinals of Omega Prime's Twisted Cross, Sonny carries a syringe containing an "identifier compound" - a special chemical used to open doors in Twisted Cross laboratories in lieu of traditional keycards, mainly due to syringes normally having no association with opening doors. 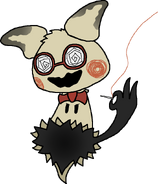