Dr. Mario is the persona Mario takes in the Dr. Mario series. Under this identity, Mario dons a white lab coat, a head mirror, and a stethoscope around his neck. In the games, Dr. Mario works at the Mushroom Kingdom Hospital, using his special Megavitamins to destroy Viruses contained in glass jars. Four of these Megavitamins must be aligned with another Virus to defeat it, and clearing all the Viruses in the jar will clear the level. Several other doctor personas of Mario series characters have appeared throughout the Dr. Mario series, such as Dr. Luigi, Dr. Peach, and Dr. Bowser.

Outside of the Dr. Mario series, Dr. Mario has also appeared in the Super Smash Bros. series, usually as a clone of Mario. He has many of the same moves as Mario, but has higher attack power and KO potential in exchange for slower mobility and a weaker recovery. Dr. Mario can also throw Megavitamins instead of Fireballs, and uses electricity-based attacks rather than fire-based attacks.

Dr. Mario appears in Super Mario MHL. His special move is Megavitamin Toss where many viruses will come out and Dr. Mario can toss Megavitamins at them and the players.

Dr. Mario appears once again in New Super Mario Galaxy 3D, but this time as a power-up. He can shoot powerful Megavitamins which can kill enemies and break Brick Blocks. However, it is only for a short amount of time. The item used is the Vitamin Flower.

Dr. Mario appears in Dr. Mario: Flu Season as the main protagonist. He specializes in red pills and defeating the Flu virus.

Dr.Mario appears as an unlockable alternate costume for Mario in Mario Tennis: Heroes Vs Villains. If Mario completes his Doctor Cup or scans the Dr.Mario Amiibo the costume will be unlocked and you will be able to use it in almost every mode. Invincible Tanooki Dr. Mario also appears for the first time. If Mario uses his Special Shot while the Dr. Mario Costume is in use the Invincible Tanooki outfit will have Dr. Mario’s head piece.

Dr. Mario, alongside the other veterans, returns in Super Smash Bros. Charged as a playable fighter. Interestingly, since Mario's moveset has changed significantly, meaning that Dr. Mario is now a wholly unique fighter. Because he still has the same moveset, he can be seen as a way of retaining Mario's old moveset in past Smash games. He has been buffed significantly in that he has Mario's speed and recovery from previous games, while also retaining his signature power. This improves his abilities as a fighter by several magnitudes, making him a much better character overall.

Dr. Mario appears as an alternate costume for Mario in Mario Kart: Infinity Remix, unlocked after winning a gold trophy on any engine class as Mario.

Dr.Mario appears as an alternate costume for Mario. 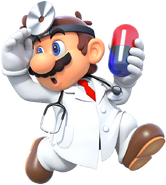 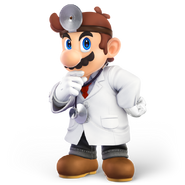 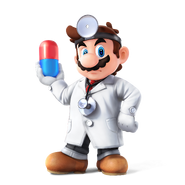 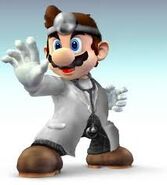 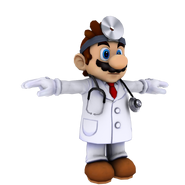 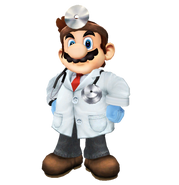 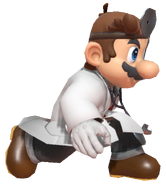 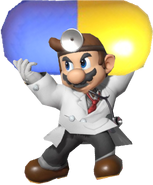 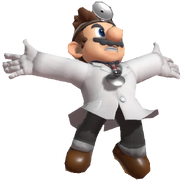 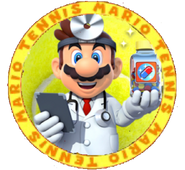 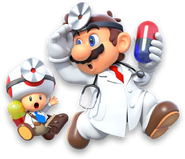 Dr. Mario alongside Dr. Toad
Add a photo to this gallery

Retrieved from "https://fantendo.fandom.com/wiki/Dr._Mario?oldid=3325759"
Community content is available under CC-BY-SA unless otherwise noted.