Dr. Luigi is the persona that Luigi adopts in the Dr. Mario series. He debuts in Dr. Luigi, which was made as part of the Year of Luigi in 2013. He works with Dr. Mario and Dr. Peach in the Mushroom Kingdom Hospital and uses Megavitamins to destroy Viruses. Initially, he wore his signature green cap as opposed to the head mirror Dr. Mario wears, but has worn a head mirror starting with Dr. Mario: Miracle Cure.

In the "Operation L" mode for Dr. Luigi and Dr. Mario: Miracle Cure, Luigi uses special Megavitamins; essentially two Megavitamins that form the shape of an "L". This can make it potentially easier to line up colors and defeat Viruses, though one must plan carefully, and messing up a placement can be difficult to come back from.

Dr. Luigi appears as an unlockable character in Super Smash Bros.: Going for Gold, and is a clone of Dr. Mario.

Dr. Luigi is a main character in Dr. Mario: Virus Chronicles along with Dr. Mario and is a playable character. He is better in the overworld, but weaker in battles.

Dr. Luigi appears as an alternate costume for Luigi in Mario Kart: Infinity Remix, unlocked after winning a gold trophy on any engine class as Luigi.

Dr. Luigi appears in Super Smash Bros. Charged as a playable newcomer. Much like Dr. Mario, he retains the moveset of Luigi from previous Super Smash Bros. games, who has gained some new moves in this game. He also inherits Dr. Mario's power, which combined with his fast mobility and combo capabilities, makes him a threatening all-around type fighter. One of Dr. Luigi's alternate costumes also gives him Luigi's trademark hat, which he wore in Dr. Luigi.

Dr. Luigi's neutral special, Operation L, has him throw an L-shaped Megavitamin forward, which can split off into two smaller Megavitamins. His throws don't utilize the Poltergust G-00, and instead uses his hands; his down throw notably has him inject a needle into opponents, putting them in a prone state. Lastly, his Final Smash is Negative Zone, Luigi's Final Smash in Super Smash Bros. Brawl, though he now eats a rotten Megavitamin before performing the move, giving the ability some origin. 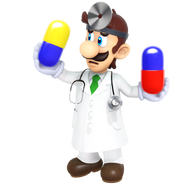 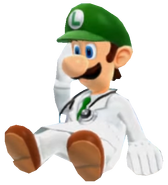