Doctor Lily Kunzite, also known as Dr. Kunzite, is a woman scientist who works for King Cube KiloBot, and shows up physically for the first time in Meta-Form: Common Force.

Prior to the events of the first Meta-Form game, she was former college girlfriend of Mr. Stelog, who eventually become corrupted by his philosophy and dumped her for not understanding that robots should be slaves and remains so, she eventually convinced KiloBot to have her in her army out of revenge, by proving her worth by quickly repairing his recently broken war robots, and thus serves for him, but as an undercover scientist.

She was responsible for building new types of robots, as well as the Skilletons made for KiloBot himself. It wasn't until Meta-Form: Common Force that she shows up in person.

Even after the event of the latter game and Mr. Stelog's death, she stills side with KiloBot after learning that some aliens and even a few humans were using robots for projects that can destroy environments in a long run, and thus become agreed with KiloBot that once they conquer the world, they will implement a rule that will forbid construction of sentient robots made for large-scale destruction.

Dr. Lily Kunzite is shown to have a sightly large chest and have quite thick hips and legs, honey skin, and purple hair. She also wears pink glasses and a large blue choker.

She wears a white scientist uniform, with a red shirt and dark-red pants. She also wears a belt where she keeps shiny red fuel in order to power-up her Flare Scepter.

Dr. Kunzite usually tend to be secretive to her enemies, and informative to her allies. She prefers to avoid problems unless if she needs to act. She also will to help out anyone who wanted to preserve equality to many species, including robots. She knowledge that hatred and love alike shall never be weaponized for any reason, as either would cause destruction and slavery, respectively, on the wrong hand.

She also shown to be very loyal to KiloBot, as despite seeing the latter as violent and mildly destructive, she prefers him over the "ever peaceful heroes" as the latter group are shown to be too busy dealing with the injustice between the species and the discrimination.

Lily had a tendency to compliment her more frequent enemies, which are Meta-Form and his friends, but never seems to compliment against more rude heroes. In fact, she shows no sympathy against anti-heroes does to the general rudeness and even potential hypocrisy they committed.

Although she have no actual supernatural power on her own, she can use her Flare Scepter to inflict fiery attacks, long as she still have the red fuel in stock. She is also shown to be very capable of repairing almost any robots with her such scepter, implying it to be magical on its own.

She is also shown to be very analytic; like a human, she cannot know everything at one point, but she can knowledge her enemies quickly once she discovers their weakness.

However, her main specialty above all is her ability to construct new devices within hours, whereas an average scientist had to take a week or even a year. She can even construct a large ship in a week, but this also leave her tired, thus KiloBot reserve the ship construction for his Build-Bots.

She is one of the unlockable characters, and as a non-Robot type, she have to use Equipments instead of Chips to enhance her abilities. She is Fire/Techno specialized, which means her fire-based attacks have a better chance of burning, and is more capable of hacking and solving computer-based puzzles faster than others.

Dr. Kunzite often see KiloBot with high regard, but she doesn't openly expresses it often. While the two may argue, it is mostly for minor details, and the two can calm down quickly, with KiloBot preferring to solve bigger issues. KiloBot himself tend to be cautious around her does to her being a human, but is overall respectful to her.

She regards Meta-Form, like most heroes, a goody-two shoes who overlooked issues like bigotry and other worldwide problems way too often, and wondered why he didn't understand how much problems such issues will cause on the long run. She still respect his decisions and compliment him when he put up a good fight. 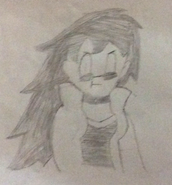 Retrieved from "https://fantendo.fandom.com/wiki/Dr._Lily_Kunzite?oldid=2646949"
Community content is available under CC-BY-SA unless otherwise noted.