Dr. Coyle is a downloadable fighter in ARMS, and presumably the last one. Dr. Coyle is the director of ARMS Laboratories, Inc, and responsible for creations such as Helix, Springtron and Hedlok, as well as the organizer of Party Crashes. Coyle was fascinated with the ARMS phenomenon ever since she was a little child, and has dedicated her entire life on researching ARMS, having even subjected herself to some experiments.

As of Version 5.0.0, Dr. Coyle will intercept the final battle at Grand Prix Levels 6 and 7, replacing Max Brass as the final regular opponent. After her defeat, she calls upon Hedlok to lock onto her like with Max Brass before, making Hedlok still the final opponent to be fought. She appears to have partial control, however.

Dr. Coyle has a metallic suit that allows her to stay afloat in the air, so Coyle doesn't jump per se. Instead, she can simply ascend when holding the jump button, and descent when letting loose. Coyle can also temporarily activate a third ARM after charging, which will appear on a random shoulder, and disappear after a while. Additionally, she can turn invisible for a short time after getting knocked down or holding guard. This invisibility doesn't grant invulnerability.

Despite being a primary antagonist responsible for the creations of the dubious Hedlok and Springtron, her official profile makes it clear that her plans aren't necessarily nefarious. However, she has had a falling out with Max Brass and holds a grudge against the ARMS League commissioner, so her goal to become the ultimate ARMS champion is possibly out of spite.

Dr. Coyle is a tall woman with green, short hair, with large bangs covering the right side of her face. She wears a black and purple mask and purple lipstick, as well as having golden yellow eyebrows and eyelashes, and green eyes, which have, like any other fighter with ARMS, spirals in them. Her ARMS are golden spring coils with large, round shoulders, and are powered up with small Tesla coils on the back that allow her to stay afloat in the air.

Dr. Coyle wears a black and green coat with a skirt, with her insignia, a skull with a lightning bolt, imprinted on her left breastside, and some lightning bolt-shaped lines on her waist. She wears gray pants and tall boots with green shoelaces and her logo above. The shoes have long, green heels and sharp spiky cleats.

It's entirely possible that Dr. Coyle didn't naturally receive her ARMS and instead received them through experimentation on herself. She likely got her extendable ARMS after her falling out with Max Brass.

Dr. Coyle was revealed for Super Smash Bros. Discord on the 4th of February, 2018 as a unlockable character. Information about how she will play or how she is unlocked remains unknown.

Dr. Coyle has been confirmed as an unlockable character in Super Smash Bros. Galactic Battle. It is unknown how she will function in battle, or how she can be unlocked. She has been hinted to have a major role alongside the other fighters in The Galactic Battle, alongside her commanding an army of Springtrons in the mode.

Dr. Coyle is a central character in ARMS JAB: Lab Rat, conducting research on unlocking the ARMS capability on rats at the beginning of the story. She works with Dr. Lambda to take some info on the vitals for the rats after they develop ARMS-like tails. She later goes down to the basement where Helix is held and debates internally on what to do with him as he was not a successful experiment- unable to decide, she is encouraged to go outside by Dr. Lambda for fresh air- after of which Dr. Lambda decides to let Helix go.

Coyle returns in the next game, re:Incarnations, which featured a "reboot" of the franchise's lore. She isn't nearly as plot-critical in this title as she was in Umbral Endeavor, though she remains an important character. 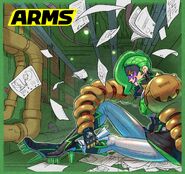 Dr. Coyle designing Hedlok with help from The Cell