Start a Wiki
Doug Piranha is is a red piranha plant with black and white pants and a matching mask. He is the titular character of the series of the same name.

Chompy the Goomba:They are best friends and adopted brothers.

Fire Breath:Doug is capable of breathing fire out of his mouth.

Super Strength:Doug is shown to be strong enough to take down a tower with a few punches.

Doug was a regular Piranha Plant until a truck full of toxic waste polluted his pipe. He mutated into a monster. He scared everyone he saw, so he became an outcast. But one day, a kind family of Goombas took him in and adopted him. He and his new brother, Chompy instantly became friends. One day, the evil Bob-omb Pirates set out to enslave all the goombas to build their ultimate weapon. They took Chompy and Doug's family too. Then Doug set out to destroy the Bob-omb pirates and get his family back. 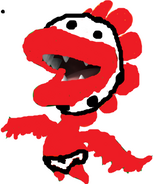 Artwork of Doug from Doug Piranha(Game)

Doug in a battle position.

Doug about to do his victory dance.
Add a photo to this gallery
Retrieved from "https://fantendo.fandom.com/wiki/Doug_Piranha?oldid=795692"
Community content is available under CC-BY-SA unless otherwise noted.