Fantendo - Game Ideas & More
Register
Don't have an account?
Sign In
Advertisement
in: Free to use Characters, What is the Boundless Fantendoverse?, Characters,
and 4 more

Doomulus Zharpine has a very distinctive appearance appearing to hasve a segmented body that holds itself together through strange gravometric powers, although Zharpine can reassemble their body in various ways their standard quadrupedal state is believed to be their natural form. They have a long neck that separates their head from their upper torso and a separation between the upper and lower torsos, their tail is also segmented ending in a surprisingly dextrous tail-end.

Much of Zharpine's body is covered in cyan crystals that are said to be the basis of their power, these crystals appear to be the basis for Zharpine sustaining themselves as they're known to even grow through Zharpine's metallic implants. Zharpine's head has a slightly elongatyed appearance with three large crystals forming a sort of armour around their mouth. Zharpine also has three eyes, two on the side and one on top of their head, while the side eyes have been enhanced by implants, the central eye has remained unchanged, this central eye also fears a prominent horn on Zharpine's head which has a lightning bolt shape to it. Each of Zharpine's eye ridges also has wing-like protrusions which allow it some degree of flight when unattached to the rest of Zharpine's body. Zharpine has four ears which have small crystals growing from the tips of each, when Zharpine is listening they will vibrate their ears to pick up sounds, it's also believed this is Zharpine's normal method of communication as Zharpine can produce an ultra-high frequency from these vibrations.

Zharpine's limbs are covered in long tufts of white, feathery fur, each limb is separated from the torso and comes it two parts, the upper limb and lower limb. The lower limb terminates in three-digit feet which are similarly covered in fur. Although each of these limbs has some degree of mechanical enhancement, Zharpine's front-left limb has notably been completely swapped out for a mecahnical limb that communicates with signals from Zharpine's brain to move in unison with the rest of their body. Despite appearances, this limb is not Zharpine's original limb, which is suspected to be kept by the Doomuli Command as a means of servitude ensuring Zharpine doesn't betray them.

Zharpine notably also has a pair of wings which normally are located behind two bony growths on their upper torso, these wings are rather distinct as they split in two forming a V-Shape when fully extended, in general Zharpine's ability to fly is somewhat limited and as such Zharpine doesn't so much flap their wings as use them to glide and dive, able to turn surprisingly quickly for a creature of their size thanks to the added manueverability the secondary wing surface provides.

Due to the Doomuli conditioning, not much is known about Zharpine's original personality, some aspects do carry through however such as being known to be one of the more pacificistic members of the Doomuli which is likely why the Doomuli decided to confiscate one of Zharpine's limbs. In spite of this pacificism, the Doomuli mindset is prevalent in Zharpine's actions being quite capable of exterminating others under the justification of it being a better outcome than the alternative. Zharpine also appears to have a bit of a green thumb when it comes to their behaviour as often they'll seek to experience life on the planets they visit before descending Doomuli machinery onto the planet.

Due to the Doomuli enhancements Zharpine is capable of vocalization, which is done through a unit that reads Zharpine's high frequency sounds as language, Zharpine's language being poorly understood by the Doomuli has led to some mistaking Zharpine as dim-witted which often plays into Zharpine's favour as many underestimate them due to the limitations of their translation device.

The extent of Zharpine's abilities is not well-known, beyond the standard attributes given to Doomuli operatives through their mechanical enhancements such as enhanced strength and recovery, Zharpine's innate abilities are not well documented. The most well-known is their body disassembly which allows the otherwise rather large Zharpine to separate themselves into many smaller parts capable of independent movement although at any time Zharpine can recall their body parts back within a certain range. 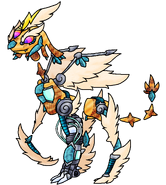 All sketches here were done by Shadow Inferno (t∣b∣c). The full character creation blog can be viewed here. 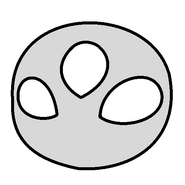 The basis of Zharpine's design 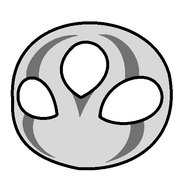 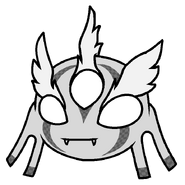 7th Revision before design was cleaned up
Community content is available under CC-BY-SA unless otherwise noted.
Advertisement