Doomulus Rhapsody (formerly known as Raphaea Lozea) is a member of the Doomuli. They were a former Muviel that was inducted into the Doomuli program by a unknown Doomuli. They are somewhat unique among the Doomuli due to their musical focus, using it in both combat and orchestrating music for fleets of Doomuli for attacks. The character was created by Helena Harper (t∣b∣c) for the purposes of having a composer Doomuli for musical sequences in Fantendo - Doomed, which was also their debut.

Doomulus Rhapsody is a musically inclined Doomuli that first appears in Fantendo - Doomed. They appear to have an role in the Doomuli Inquisition but also serve a general role for the Doomuli as the composer of music for mass Doomuli invasions.

Doomulus Rhapsody is a Doomulus with an electronic screen for a head, similar to Doomulus Revise, although their head features tilted music notes that resemble eyes instead. They appear to be completely mute, lacking a mouth. On top of their head they wear a hat with a badge of the Doomuli poking out from it. They have a greenish blue robotic frame with thin upper arms but thick lower arms with three mechanical claws, usually holding a baton. Their frame looks like a marching band uniform and has red frayed coattails. On their legs, the symbol of the Doomuli Inquisition can be seen. They have exaggerated heeled shoes.

Doomulus Rhapsody is a mute character that doesn't really speak for themselves, instead relying on the force of singing Rhapsobots under their control to sing for them. They appear to be well respected by the Doomuli as a whole, although many tend to pigeonhole Doomulus Rhapsody as just the composer Doomuli, which leads to underestimation as a whole by the organization. Contrary to their beliefs, Doomulus Rhapsody might be one of the most competent Doomuli in the entire organization and Doomulus Prime has some interest in possibly promoting them to be very high up due to their ability to organize and lead.

Their role in the Doomuli Inquisition is not really known. They appear to be fairly absent from the organization despite being in it, probably because the group is more known for their stealth. It is possible that they organized the raids to some extent, although Doomulus Xyne seems to value his own strategies instead.

Doomulus Rhapsody appears to be somewhat gender-fluid, as seen with their gendered nicknames. They appear to prefer they/them pronouns.

This section is written more as a guide for their usage for other authors. 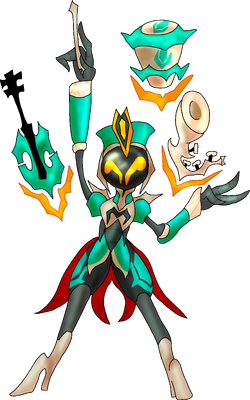 Doomulus Rhapsody is fairly unique in that they fight with musical instruments, usually having three under their command. These instruments tend to be somewhat familiar yet alien looking to incorporate whatever music tracking the author choses to do- hence a lot of leeway for musical choice without breaking even the most musically inclined person's sense of immersion.

These instruments actually act fairly similar to Standing Ripples in term of function, as they can be summoned and unsummoned at will and can do remote attacks. They have a orange tilde underneath them when active and do damage to whoever is nearby. Their sound can be amplified to do more damage from further distances. The instruments circle around Doomulus Rhapsody unless shot forward to deal damage physically, which continues to blow back a opponent back as the instrument plays.

Destroying instruments tends to deal damage to Rhapsody themselves- in boss scenarios, you could easily split their lifebar into thirds, with each third representing a instrument's health. Doomulus Rhapsody controls their instruments with their baton stick, which they wave. This can be use to telegraph their attacks- watching for certain flicks from their baton can alert you of what attacks are about to happen.

Doomulus Rhapsody was confirmed to have a role in some musical sequences in the film on April 13th, 2020. Their key art was released on April 12th, 2020, although no actor was attached due to them being mute. Their information was released alongside a revised release date for the film that was caused due to delays in production.

In general, Doomulus Rhapsody seems to be well regarded by the organization but somewhat pidgeonholed into their role. Doomulus Prime seems to be interested in possibly giving Rhapsody a possible higher role in the future due to their ability to lead and orchestrate.

Retrieved from "https://fantendo.fandom.com/wiki/Doomulus_Rhapsody?oldid=3210696"
Community content is available under CC-BY-SA unless otherwise noted.