Fantendo - Game Ideas & More
Register
Don't have an account?
Sign In
Advertisement
in: Free to use Characters, What is the New Fantendoverse?, Fantendo Smash Bros. Combat (erictom333),
and 14 more

Doomulus Prime (sometimes known as Doomulus Zero in Pre-Shattering works) is the leader of the Doomuli. He was first mentioned in Tragedy (2015), although his official first full appearance is during the after credits of Fantendo Smash Bros. Victory. He has since made minor appearances in many different works, although his presence is engraved in the motivations of many of the Doomuli members. After being alluded to for over 8 years, Doomulus Prime is set to be one of the major antagonists of the Fantendoverse's Phase Four alongside CHELPRO and Netnu.

Doomulus Prime is the leader of the Doomuli, obsessed with the past and living forever to see what comes next. Using the DOOM system to make himself immortal, Doomulus Prime began his goal of protecting the universe for historical purposes, going to any extremes to preserve cultures in his metaphorical amber- the Doomuli. These societies have been technologically stunted as a result, with the only new advancements needing to be approved by the Doomuli. While Doomulus Prime sees himself as the good guy, what he's doing is a version of galactic imperialism.

Majorly refining his design from Days of Victory and appearances from post-Victory works, he appears in the new Doomuli 2.0 bodies, which have orange-colored containers holding his skeleton making up his body. His face has also been much more condensed, giving him large, pointed ears that previously held his orb-like head. He also only has four arms and lacks his tail in this design. Two of the arms have deattached claws, while the other are smooth and appear to be nubs with similar functionality to the nub-like limbs of Beorns.

He also has a new cloak, with a hood over his head. He also features a small device to the side of his hip that features a two-headed skeleton baby, which is attached through two plugs on his body- one appearing to be more mechanical and the other appearing to be from his skeleton body, almost like some kind of umbilical cord.

In his short appearance in Days of Victory, Doomulus Prime's design and character was finally revealed. He is a rather bulky character with a orb-like head with a mysterious misty black object inside, contained within a bulky holder. He has six arms, each having a generally different purpose, with drills, deattached claws, fully articulated fingers, and pincers attached at the end. Two of his arms are crossed across his chest. He has samurai-like body plates across his hips, with two bulky legs. He also has a sharp-ended tail.

Doomulus Prime is a cold, calculated character who does not take risks with his own life on the line, preferring to entrust it to his other Doomuli members. He will retreat from a fight if he does not have the advantage. If he does fight, it's an absolute curb-stomp, with few either remaining alive or presented with a worse fate. This personality trait has kept him in the sidelines, watching over how his big project to save the universe's cultures is going.

Doomulus Prime sees himself as the good guy. He does not see any possible downsides to becoming a Doomulus, with it being offered a gift to people he respects that have yet not become one. He wants to conquer planets to protect their cultures, freezing them in time in essence, not advancing unless he permits it. New things tend to infuriate or even scare him until he has been given distance from them to appreciate them. He is constantly trapped in the past.

Doomulus Prime is actually very friendly with his fellow Doomuli and listens to them closely. He is considered a "fun boss" by most of the people working with him. He has a relaxed attitude to his project, preferring the Doomuli to work at their own pace and to establish themselves as friends to the people who he plans on assimilating into the Doomuli project. As such, the Doomulus actually have a good reputation in the planets that they have taken over. He hates failures like Doomulus Grime, who not only failed to do this but blew up the planet he was supposed to conquer.

However, despite his friendly relations with other Doomuli, he isn't dumb. If he suspects a traitor in the midst, he keeps a close eye on them.

Prior to Days of Victory

After Days of Victory

Doomulus Prime makes his first official appearance in Days of Victory, appearing in the first post-credits scene. Here, Doomulus Prime establishes his want to conquer Earth now that the gods have all been Descended, who were preventing him from attempting it previously.

Doomulus Prime talks with Fenrir of the Flame in Just Like Old Friends, lying to Fenrir about his forces not being able to kill Kiva Glaive and her falling to Earth. He then enlists Doomulus Thai to take care of Kiva and her rebellion forces to help convince Fenrir to fully fund the Doomuli. This winds up being successful, and with this success in tow, he enlists Thai once again to find his Hyper Mode orb.

Doomulus Prime appears in Fantendo's Card Cataclysm as one of many Boss Cards.

Doomulus Prime is the most powerful member of the Doomuli, although his powers are not always consistent. He draws from the Power Chaotic, being able to also gift it to his fellow Doomuli. Doomulus Grime previously had a fraction of this power before it was stripped from him. This power, which is normally only seen on deities in the Fantendoverse, allows him to do a variety of things, mostly creating energy projections and imbuing his weapons with special chaotic properties.

Doomulus Prime's most deadly ability is his ability to Reap. This power comes from his scythe, and is activated through his Power Chaotic, making it borderline useless for anyone else. When he slashes someone with his scythe, they do not take damage, but a timer is placed on their back. When the timer expires, Doomulus Prime can instantly teleport to them to kill them, not even leaving a soul behind as it belongs to him now. He can use those who he has killed as his own personal undead army, however he only reserves this for combat scenarios as he claims ghosts do not have much use for him otherwise compared to the Doomuli.

Doomulus Prime is also capable of infecting his victims with Void-In. This casts a small void inside the victim that feeds off their energy, growing bigger if they eat or exert their powers. Eventually it expands and kills them, as well as others. This power is used less often, as Doomulus Prime finds it too messy.

Doomulus Prime is the leader of the Doomuli and is very well respected. He is considered a fun boss by people working under him and he has a hands-off approach for the most part. He believes in his members and knows what jobs they can handle and accomplish. He provides great benefits to them, offering immortality and free upgrades. He is also willing to tutor new members as well as providing events for the Doomuli to do that aren't taking over planets or accomplishing a goal- just for fun! How can this organization be evil if they have donuts for everyone's birthdays?

Doomulus Saline is one of Doomulus Prime's closer associates, as she has a knack of collecting things for his need to remember the past. She shows him upmost respect, something she doesn't reserve for anyone else. Because of her, Doomulus Prime has something from every major event in Doomuli history. 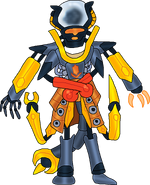