Doomulus Grime (formerly known as Doomulus Nine in the original Fantendoverse canon and formerly known as "Kaliban" before joining the Doomuli) is the ursurper of what would have been several planets, including Zeon and a former member of the Doomuli. He first appeared as the main villain in the game Fissure and are free to use as a character for any Fantendo user’s creative endeavors.

Doomulus Grime mostly appears as a villain, but was planned to be the main protagonist of the Doomuli game, which would chronicle his rise to power before the events of Fissure. He appears in the new Fantendoverse canon, the Prodigy saga. After the Prodigy saga, Doomulus Grime was marooned on Two's planet and eventually teamed up with Unten to get off the desolate planet in A Flash Beorn Our Eyes.

Doomulus Grime is heavily cloaked, and caped, with armor both above and underneath his cloak. He wears long gloves and boots and a mask, obscuring his skin, and face, which resembles that of a crocodile. Part of his body is machine, mostly his upper right face, left arm, right thigh, and lower left leg.

In Underground (2015), he has a new outfit that adds a gas mask-like mechanism to his mask and his tail is now more circular. The outfit itself is similar to a body suit.

In Fantendo Smash Bros. Victory, he wears a purple outfit to reflect his new allegiance against the Doomuli, although is not quite fully on Unten's side.

Doomulus Grime is portrayed as somewhat ruthless in Fissure (2014) and hungers for power. He claims he wants to suck Zeon dry of any resources it has and then command the husk of the planet with whatever life is left. Later on, it is revealed that not only is Doomulus Grime considered one of the weaker Doomuli, but also considered somewhat of a failure by other Doomuli due to how long it took him to take over Zeon and how he can't keep it under his control due to Unten Bluzen's actions against him.

Doomulus Grime operates like a capitalist, conducting factories and only getting personally involved when he sees it as necessary. This makes him somewhat unusual from the other Doomuli, who work with other Doomuli if they need other forces, if at all. Doomulus Grime is rare among the Doomuli in that he invents minions to work with him.

He also is extremely temperamental by the time of Tragedy (2015). Fed up with his losses, he decides to blow the whole planet up using the Planet Breaker Drill. He seemed to have no concern for life other than his own. He also did this seemingly knowing that it was actually against Doomuli code to blow up planets, and immediately went into hiding after the destruction of Zeon.

When forced to work with Unten to escape Two's Feeding Planet, Doomulus Grime actually showed self-harming behavior, outright asking Unten to hurt him with a rock. Similarly, he let Zerita sink her claws into his head. It seems the only way he thinks people will forgive him is if they hurt him for what he has done. However, with his original reunion with Unten, he seemed aware that Unten would be too timid to actually hurt him and took the advantage to try and finally kill him. Once he missed the chance to hit him with the rock, he again asked Unten to hit him, claiming they were both as equally bad.

After his escape, Unten and Grime formed a friendship, with Grime revealing his original name: Kaliban. Grime worked with Unten to stop the SPHER-O droid that was attacking Seattle, saving the day. With his role in the attack a secret to everyone but Unten and Alcyone, Grime took off again, but this time somewhat reformed.

This reformation process would continue into Just Like Old Friends, where he briefly appeared. After letting Zerita claw holes into his head, Doomulus Grime agreed to fight on the behalf of the Resistance against the Doomuli, going against the very organization that allowed him to take over Zeon in the first place. While he is still not very trusted by everyone, Doomulus Grime is eager to please and fight on a side that actually wants his help.

A small detail is that Doomulus Grime considers "nine" to be his lucky number.

Doomulus Grime was a Missyntile named Kaliban before he was inducted into the Doomuli. Not much is known about his past, although it is likely he failed to conquer several planets before finally managing a hold on Zeon. This hold on Zeon began somewhat before the events of Fissure (2014) took place.

Makes a quick cameo as a skeleton that menaces Unten in a vision in Chapter 10 of the story.

“What’s it like knowing your race is slipping away like grains of sand in a hourglass? More importantly, what was it like slamming your hand again the top of the hourglass?”
— Doomulus Grime in Fantendo - Genesis

Doomulus Grime has a brief cameo within a vision witnessed by the Catonea Keraniza. In the vision, he speaks to her about her failure to save the people of Zeon as she escaped the planet.

Doomulus Grime was once known as Doomulus Nine, and was a member of the Doomuli organization, which ruled many solar systems in the galaxy. As holding the Doomulus Number of Nine, he was the second-most powerful in the group, second only to Doomulus Zero. Though he was the second-most powerful, Nine actually was only biding his time to steal the GigaDrill, which was capable of absorbing the nutrients of a land's soil and transfer it to a living organism. Planning to use this to give himself extreme power, Doomulus Nine stole the GigaDrill, rechristened himself as Doomulus Grime, and fled. Doomulus Seven and Doomulus Eight went after him, but they were defeated. After this, Doomulus Nine escaped to obscure planets to avoid the other Doomuli.

During the end of the game, the GigaDrill had almost completely filled up on power, getting to 99%. Grime used a machine to transfer this immense amount of power to his body, becoming a supercharged monster in the process. Despite this power, Unten defeated him, which made the machine suck his power back until Doomulus Grime's power was completely depleted, and he collasped into dust. The GigaDrill then fell into the Fissure, which caved in. This leads to the setting of Underground.

Doomulus Grime's backstory is revealed in the first part of the game. He is a robot that was created by Unten's real father that became self aware. He is responsible for Unten being adopted, as he kidnapped Unten, flew away, and dropped him on somebody's porch. He flew to an abandoned planet, where he found a machine that duplicated himself several times. The planet then became the Doomuli Organization.

Seven years later, he changed his name to Doomulus Grime, stole the GigaDrill, and flew away from the Doomuli Organization because the robots were turning evil. Doomulus Seven and Doomulus Eight followed him, but they were hit by asteroids. He crash landed on Zeon, where the GigaDrill started by itself. He dove after the drill, and it electrocuted his systems, turning him evil.

Doomulus Grime is a Doomuli who was formerly part of the Missyntile species before he was transformed. As such, Doomulus Grime is pretty strong and can use his claws and horns to embed himself into walls or ceilings, giving him great mobility as well. He also resists most toxins, thanks to his Missyntile make-up and his Doomuli reinforced metal skin.

Doomulus Grime was also capable of using Power Chaotic to an extremely limited extent. It is unknown who exactly granted him this power; some say it was Doomulus Prime himself while some sources claim it was Black God. Due to a line said by Doomulus Thai in A Flash Beorn Our Eyes, it is likely Doomulus Prime as it is unsure how they would have removed his ability to use Power Chaotic otherwise. As of present writing, he no longer has this power as it was stripped from him.

As a Doomuli, he is able to switch out his body parts to adapt to different situations as seen in Underground (2014). This radically changes his appearance and some of his skillset, giving him an explosive tail and increased resistance to toxins that would even kill an Missyntile.

Terminus Grime (also known as Liquid Metal Doomulus) is the form that Doomulus Grime takes on when he eats a Glistening Blump. It was first seen in Fissure (2014) during his final phase and Unten had to become Midas Unten using the Glistening Blumps to even stand a chance against him. In this form, Doomulus Grime could convert himself into a metal wave to quickly travel across the battle arena and hit his opponent, as well form into various objects. This is possibly thanks to his Power Chaotic abilities working in tandem with him to reshape him.

This form has only been used once; even in his final confrontation with Unten during Tragedy (2015) he did not use this form. This is perhaps due to his fear that Unten will defeat him given that he was much stronger than when they first fought, or that he was entirely relying on the Planet Breaker Drill to do the job.

When in this form is used, Doomulus Grime takes on a shiny metal coloration with the light in his arm cannon taking on a golden color as it is now powered by the Glistening Blump. Doomulus Grime also has metal droplets fly away from him while using this form, usually behind his back. Doomulus Grime can transform his body entirely in this form so long as it stays the same mass as him. 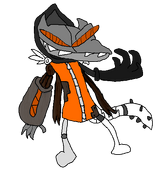 An Grimebot, made by his corporation.

Doomulus Grime as he appears in Fantendo Smash Bros. Shattered

Doomulus Grime as he appears in Underground (2014)

Grime as drawn by Blenda. 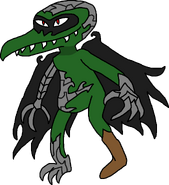 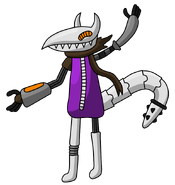