Lil'Pengu is a boss character in Doom Dome Battle.

A talking penguin who works at the Wildefort Zoo, together with his best friend, Fat French Penguin. He is a small butler-like penguin with a Gilbert Gottfried-like voice. He was captured by the extraterrestrials, namely Gorge, for experimentation. Lil'Pengu eventually ended up being fused with the DNA of Violet Snow, a mutant with ice powers, and thus gained ice powers, which corrupted his mind. He was eventually defeated and saved by FFP and Justin Bailey. FFP took him back home where he continued his life in peace once again. 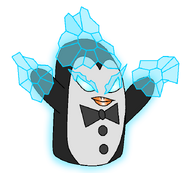 Profile
Add a photo to this gallery
Retrieved from "https://fantendo.fandom.com/wiki/Doom_Dome_Battle/Lil%27Pengu?oldid=2177652"
Community content is available under CC-BY-SA unless otherwise noted.