CatBot is a playable character in Doom Dome Battle, being released later than the default characters in the game.

Before CatBot became as it is now, it was a regular street cat who was caught in the catastrophe. It was captured by Gorge and brought to the mothership where it was experimented on, turning it into a cyborg cat. Half cat, half robot. Like most of Gorge's experiments it was kept inside of the ship, until it crashed. CatBot made its escape and discovered what his home had turned into. He walked through the wreckage searching for a way to bring everything back to normal or to end it all.

CatBot is the smallest character in the game, however always hovers in mid-air so it is able being hit. It has low health, decent strength but is super fast. It can dodge very easily, by lowering its height. It relies mostly on evasion and attacking. It has a long range laser gun eye and can quickly dodge behind opponents to scratch them.

CatBot's Doom Attack is If it fits I sits. When used CatBot dives down into a carbon box and sits in it. The box rises and CatBot appears in a mech outfit and shoots multiple missiles from the two missile launchers on its shoulders. The missiles barge into the opponent.

When the attack KO's them the smoke clears and shows the opponent's body full of holes before it falls down.

The cat's story starts with it strolling through the city until it gets captured by Gorge and wakes up in the laboratory in the mothership after its crash. It notices it is a cyborg now and gives itself the name CatBot. It makes its way out of the mothership and roams the streets seeing how badly it has been ruined. In the end he encounters the Grim Reaper who sees that the cat doesn't want to live like this in this world. And as a gift he battles CatBot and reaps its soul. 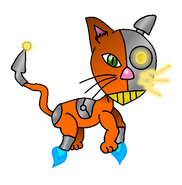 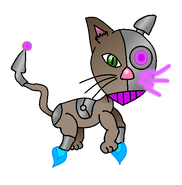 Profile
Add a photo to this gallery
Retrieved from "https://fantendo.fandom.com/wiki/Doom_Dome_Battle/CatBot?oldid=2175035"
Community content is available under CC-BY-SA unless otherwise noted.