Donkey Kong Land Returns is a Nintendo 3DS game developed by Toucan and published by Nintendo in 2012. It is the return of the Donkey Kong Land series. This game will feature a Banana Yellow game card instead of a standard white game card. In November 2012, Nintendo released a green Donkey Kong themed 3DS system that came bundled with this game.

DKLR plays like the original DKL games. You play as a team of two kongs and have to get through many types of levels. On the map players will select two kongs they wish to use. All kongs can complete every level, but there are secrets that only certain kong combinations can access.

Diddy Kong - Donkey's little nephew, his small size makes him the fastest and allows him to jump higher than the other kongs.

Dixie Kong - Diddy's girlfriend. She can use her ponytail to hover and get across large gaps.

Kiddy Kong - Dixie's cousin. His immense strength allows him to break weak floors. He can also jump on the water.

Cranky Kong - Although he's grouchy, he'll give you some tips on where to find Bonus Barrels.

Wrinkly Kong - Even as a ghost she can help you. She'll give you some tips on gameplay.

Funky Kong - Funky has various challenges you can play to win some Banana coins, bananas, or extra lives.

Swanky Kong - He'll ask you questions about the game. Get them correct to win bananas and lives.

Rambi - He can smash through nearly any enemy. Hold A for Rambi's charge.

Enguarde- He can help you swim very easily. Hold A for Enguarde's stab.

Squawks - Squawks can help the kongs get to out of reach places. Press Y to shoot an egg.

Quawks - Quawks can't shoot eggs but he can carry barrels. Hold Y to carry a barrel

Parry - He flies above you, collecting objects for you.

Ellie - She can shoot water and carry barrels with her snout. Hold Y to carry a barrel, press R to shoot water.

Bananas - Collect 100 for an extra life.

Banana coins - Collect these to buy hints from Cranky, or use Funky's plane.

Kremkoins - When you beat a bonus game you'll win a Kremkoin. You'll need all the Kremkoins in the game to complete the game 101%.

DK coins - There's one of these hidden in each level. Collecting them will add to your percentage.

Normal - These barrels will roll in one direction and break when they hit a wall.

Vine - These barrels will break when they hit an enemy.

Steel - These barrels roll through tough enemies and bounce off walls. You can ride on top of one.

DK - If you've lost the other kong, break this barrel to get him back.

Star - This is the mid level check point, if you lose you'll return here.

Bonus - Get in these to go to a bonus game.

Cannon - Shoot yourself out of one of these to reach new heights.

Animal - You'll turn into the animal that appears on the side of the barrel.

Rocket - These will fly up and shoot you out like a cannon barrel.

Kritter - These guys just walk forward. Just roll or jump on them to defeat them.

Klaptrap - This small kremling has huge jaws. You'll get hurt by rolling into them, so jump on top of them to defeat them.

Gnawty - Another weak enemy, just a small attack will defeat them. 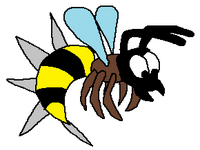 Zinger - You can't defeat these guys directly, but you can defeat them with a barrel. 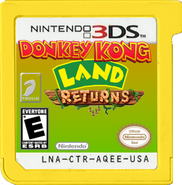 The Donkey Kong themed 3DS
Add a photo to this gallery

Retrieved from "https://fantendo.fandom.com/wiki/Donkey_Kong_Land_Returns?oldid=1906135"
Community content is available under CC-BY-SA unless otherwise noted.