Donkey Kong II (Pronounced Donkey Kong the 2nd) is a Pink clone of Donkey Kong. He's a grown up version of Junior II who made his first and only appearance in Donkey Kong Jr Math .

Donkey Kong II appeared in Mario vs Donkey Kong: Return to New Donk City. In this game,He is the boss of the 3rd world (Rambi Road). He attacks by jumping around and throwing barrels at Mario.

Donkey Kong II returns in Donkey Kong Country Crystalized.  In this game,If you lose a certain amount of lives in a level,A Pink barrel will appear near you. If you throw the Barrel,Donkey Kong II will break free and complete the level for you. He will skip secret areas and all the items he collects don't count towards your total. 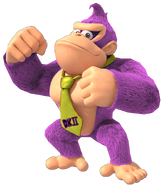 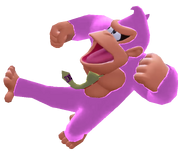 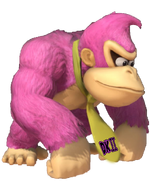 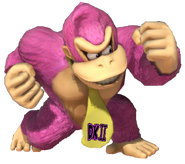 Retrieved from "https://fantendo.fandom.com/wiki/Donkey_Kong_II?oldid=2860949"
Community content is available under CC-BY-SA unless otherwise noted.